There are a lot of reasons to be discouraged these days. I mean really, that divisive, crude president hosted by a divisive, nationalist prime minister visiting Gandhi’s ashram. It’s just too grotesque for words. 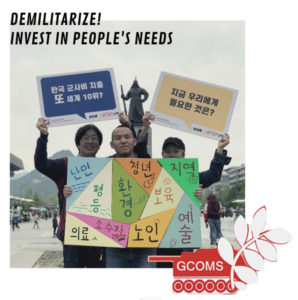 So, needing some uplift, I thought about all the grassroots organizing that goes on all the time, around the world, on so many issues. One campaign that war tax resisters have been and should continue to be linked to is the Global Campaign on Military Spending (GCOMS). They are gearing up for the Global Days of Action on Military Spending (GDAMS) from April 10 to May 9, 2020, and their nicely redesigned website has excellent background information on military spending and related topics.

The Global Campaign on Military Spending is a year-round international campaign founded in December 2014 with the aim of raising awareness on the excessive amount of public money spent year after year on the military system all over the world and the need to reallocate that money to human and environmental needs.

GCOMS is run by a steering group of peace activists from all over the world, coordinated by the Centre Delàs of Peace Studies in Barcelona (Spain), which works as a decentralized office of the International Peace Bureau. NWTRCC is one of about 150 partner organizations from around the world — all named and linked on the About page of the website if you are looking for a good list of international peace organizations. 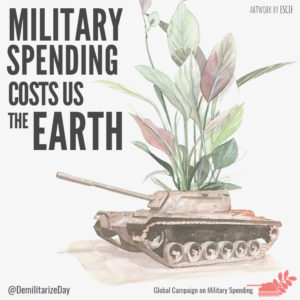 The spring actions encompass tax day in the U.S.; the April 29 release of SIPRI’s annual updated data on military spending; and ending on Europe’s Day of Peace & Unity on May 9. The campaign in the U.S. is coordinated by Joseph Gerson, with the American Friends Service Committee office in Cambridge.  The U.S. planning committee is setting up some briefing calls on the U.S. military budget. The first one is planned for March 19, 8 – 9 pm Eastern time, with Lindsay Koshgarian (National Priorities Project) and Bill Hartung, among other things, author of Prophets of War: Lockheed Martin and the Making of the Military-Industrial Complex. You must register to access the call (click on this link) . 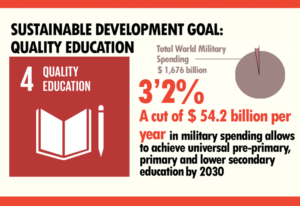 If you are planning a tax day action, or actions around tax day, try to link up with GCOMS to be part of this wider network. Local and regional groups can list their actions on the GCOMS website, which has lots of resources, including a whole handbook on How to plan your campaign, along with photos and reports from previous years’ actions. The infographics page is fun and useful. If you use social media, grab some of those and use them in your posts.

8 thoughts on “A Worldwide Demand to Cut Military Spending”