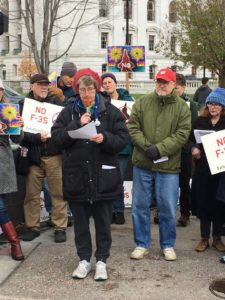 During the Vietnam War, I joined Friends (Quakers) and other peace activists at the Post Office on tax day to pass out War Resister League pie charts showing how much of our national budget was spent on war. In the late 1970’s, I heard Richard Catlett and Bruce Chrisman speak about their war tax resistance at a Friends gathering and was inspired by their witness.

Getting through medical school gave me the courage to begin resisting payment of war taxes. As an employee, I have inflated my withholding allowances. When I was in family practice, I lowered my salary to below the taxable income level to prevent collection. As a contract physician, I paid what I owed in self-employment taxes (SET) every year, but “redirected” all of my federal income taxes (FIT) to peace / justice groups and organizations that meet basic human needs.

The IRS has seized my car and checking account funds and has repeatedly levied my wages. My strategy has been to work several jobs, so that if a permanent levy were placed on my wages at one work-place, I could either reduce my hours at that job or quit and still have a backup job. When I’ve had the money, I’ve paid rent, health insurance, and food bills in advance. 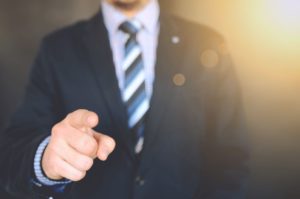 Photo by Lukas from Pexels.

I have met four times with IRS representatives over the years. When IRS revenue officers asked me where I worked, I simply told them to check my income tax returns, since I file yearly. Recently, I received an intent to levy notice and a letter saying that IRS revenue officers wanted to visit me in my home. A home visit seemed a bit intimidating, but I thought a face-to-face visit with the IRS revenue officers could humanize them and me. The meeting was set for November 5, 2019.

When Justin and Ryan arrived, I explained why I have been a war tax resister. I gave them a copy of a National Priorities Project pie chart showing that over 50% of our 2020 discretionary budget is allocated for “defense” spending and a flier about the National Campaign for a Peace Tax Fund. I also gave them an article I wrote about my war tax resistance for the local newspaper. 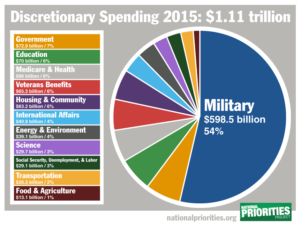 They briefly perused the materials I gave them. Ryan saw the word “Quaker” in my article and said he had heard it was a peace church. They both said I was the first war tax resister they had ever met!

Then they got down to business and asked me about my income, where I work, and what my assets and liabilities are. I told them to check my 2018 tax return for employers and income. I told them my main assets are my wages, car, and life insurance. I have no retirement funds or investments. I also gave them a rough summary of my monthly expenses.

They then asked me to fax them copies of my life insurance policy, bank and credit card statements, health insurance and other bills, so they could decide how much “I could afford to pay.” This felt like an invasion of privacy, plus the information could aid them in the collection process. And any payment plan would require a promise from me to pay all future income taxes! So I told them I would probably not comply with this request.

I asked if they were planning to seize my car. They said they do not normally seize cars and were surprised to hear my car was seized in the mid-1980s. They asked me how much I drive for work (I work in rural Wisconsin hospitals) and they acknowledged that my car appeared necessary for the work I do.

Jerry Chernow, a long time war tax resister, accompanied me during the interview. Just having his knowledgeable and feisty self there was a huge support. It takes another war tax resister to understand what it is like to challenge the IRS.

After the visit, I received a letter from the IRS notifying me that their revenue officers plan to speak with my neighbors, employers, and bank. My bank and employer already know about my WTR, but I am also going to speak to them again as well as my neighbors.

[Editor’s note: Paula was mailed a letter by IRS revenue officers asking to meet, making this a voluntary meeting. This is very different from an IRS summons, which would have legal ramifications for declining. Meeting voluntarily with IRS revenue officers does not necessarily increase or decrease one’s chances of later receiving a summons. In both instances, the IRS is hoping to obtain information about one’s assets that would aid them in the collection process.]