In remembrance of Larry Gara 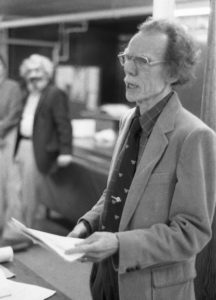 Larry Gara at a WRL event, May 1984. Photo by David McReynolds.

As many readers know, we date the “modern war tax resistance movement” to World War II, when hundreds of amazing people refused to participate with their bodies and/or their taxes. These resisters tended to be committed pacifists, many of them already involved with War Resisters League or the Fellowship of Reconciliation or members of peace churches, such as the Society of Friends.

Larry Gara was one of them. I knew and worked with him during my time on staff at the War Resisters League and was sad to learn of his death at age 97 on November 23. After the war years he became a history professor and retired in 2002 from 40 years of teaching at Wilmington College in Wilmington, Ohio. You can read his resistance and prison story in a lovely book, A Few Small Candles: War Resisters of World War II Tell Their Stories, which Larry co-edited with his wife Lenna Mae Gara, who survives him. 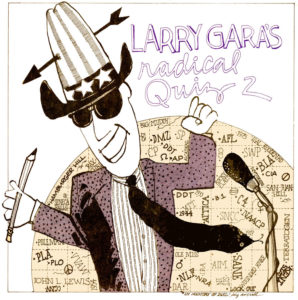 Thinking about all the ways that Larry contributed to war resistance and to War Resisters League, reminded me of the Radical History Quiz he used to write for WRL’s Magazine, The Nonviolent Activist. So, for today’s post I decided to pull out questions from some of his quizzes that appeared in the magazine between 1989 and 2002.

Most of these questions or answers relate to WTR somehow. If the answer is a person, it is usually someone who was a war tax resister, and you can find references to them on NWTRCC’s history pages or on this “Pioneers of the Modern American War Tax Resistance Movement” page collected by David Gross.  A few are just good war resistance stories.

Answers are at the bottom of the page.

1. Who was the Quaker pacifist tortured for his refusal to obey orders during the Civil War, and whose wartime diary became a peace classic?

2. In 1940, eight theological students refused to register for the first U.S. peacetime draft. Their action was organized by:

3. An international pacifist community founded in 1940 near Cleveland was called:

5. Christian anarchist and self-styled “one man revolution” who picketed the IRS offices each Tax Day and fasted a day for each year that had passed after the bombing of Hiroshima:

6. Missionary who was ousted form British-controlled India for supporting the Gandhian independence movement, he also wrote Democracy and Nonviolence:

7. Labelled by Time Magazine as America’s best known pacifist, he had briefly belonged to the Trotskyist Workers Party:

8. A theater group founded by Julian Beck and Judith Malina and involved with the nonviolent movement was called:

9. A poet who served time in jail rather than pay a fine for an act of civil disobedience in the Redress demonstration against the Vietnam War was

10. In what song did the Hello People tell of going to prison for war resistance?

11. A founder of Peacemakers whose war tax resistance led to the threatened seizure of her land trust home in Cincinnati:

12. Folksinger/founder of the Institute for the Study of Nonviolence:

13. For which war tax resister(s) did dozens of supporters create a kind of war tax resistance camp in Colrain, Massachusetts, to block IRS efforts to seize a home?

14. Which celebrated U.S. writer and activist started both careers in Washington Square Park?

15. How much money was redirected in the year 2000 from the Pentagon to progressive causes by “peace tax” funds and individual war tax resisters (according to NWTRCC)?

A Prothonotary Warbler plays an important part in the case of:

(Ok, the bonus question has nothing to do with WTR, but Larry was an avid birdwatcher so I had to throw that in.  More on that case…)