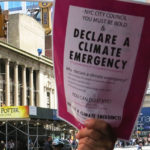 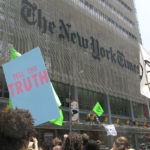 On Saturday, June 22, Extinction Rebellion NYC organized small group discussions in a midtown Manhattan park, followed by a march to take the message of “climate emergency” to the media – in this case directly to the headquarters of The New York Times.

Many have heard of Extinction Rebellion (XR) now, which started with large actions in London, blocking bridges to demand decisive action from governments on the environmental crisis. The UK group describes XR as an international apolitical network using non-violent direct action to persuade governments to act on the Climate and Ecological Emergency. 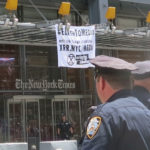 XR NYC has a list of specific demands for the media. 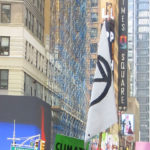 In the U.S., XR has added a fourth demand: “We demand a just transition that prioritizes the most vulnerable people and indigenous sovereignty; establishes reparations and remediation led by and for Black people, Indigenous people, people of color and poor communities for years of environmental injustice, establishes legal rights for ecosystems to thrive and regenerate in perpetuity, and repairs the effects of ongoing ecocide to prevent extinction of human and all species, in order to maintain a livable, just planet for all.”

I’ve been interested in XR because of its explicit call for nonviolent direct action, which the New York City group has put into action a few times since January 2019. Organizers tend to be creative — and agile climbers — so the actions are colorful and serious at the same time. 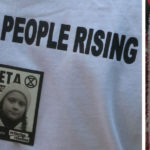 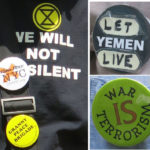 Lots of antiwar activists have been joining these actions, whether as supporters or risking arrest. While many of us find XR a little too focused on its own brand, we also find that most of the individuals who turn out make the connections between many issues. In my small group one young activist got into a well-received rant about the need to stop buying bombs with our money and use Pentagon funding to save the planet instead.

This is probably an appropriate moment to remind readers to mark their calendars for the November NWTRCC gathering, which is being planned with a focus on collaboration between war tax resisters and environmental activists. There should be a lot to share!

2 thoughts on “On the Streets with XR”