We had a delightful NWTRCC gathering in Washington, DC this past weekend. I want to start with a HUGE thank you to the Dorothy Day Catholic Worker, who hosted folks who needed beds, hosted some of our weekend activities, and helped many of us make it down to the Venezuelan Embassy after our business meeting on Sunday. Thanks also to those who helped with food.

Here are some of the highlights, in my humble opinion: 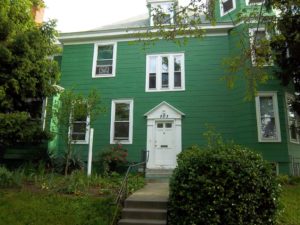 Friday evening was supposed to begin with a report back from Code Pink activist Paki Wieland on her recent trip to Iran. Paki and other activists have been staying at the Venezuelan Embassy since it was officially turned over to them when Venezuelan diplomats who (using Code Pink’s words)  “represent the legitimate government of Nicolás Maduro were forced out of the U.S. last week.” Those who have left the embassy have not been allowed to return, so Paki decided to stay, which meant she missed our conference. In her stead, Code Pink cofounder Medea Benjamin joined us to share the latest info on Venezuela and her recent trip to Iran. This was held at the Catholic Worker as part of their monthly clarification of thought series. 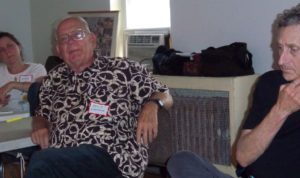 On Saturday, we met at the Emergence Community Art Collective. The morning included brainstorming to update some of our materials for Tax Day 2020. We hosted our requisite War Tax Resistance 101 & 201 workshops, with a couple folks joining the 101 session.

After that, David Zarembka (who was at the founding meeting of NWTRCC in 1982, but now lives in Kenya) offered an analysis of US participation in conflicts in South Sudan, Somalia, Yemen, and Eritrea; and how this is accomplished through the military of pro-US countries—Ethiopia, Kenya, Uganda, Rwanda, and Djibouti. Though the only official US military base on the African continent is in Djibouti, there are dozens of US military outposts. 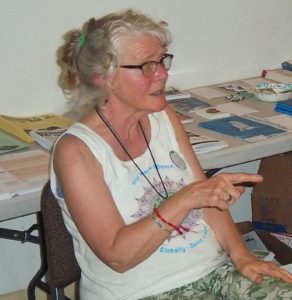 Sue Barnhart spoke on her recent trip to the Southern Border.

Sue Barnhart (of Eugene, Oregon) followed with details of her recent trip U.S.-Mexican border. She detailed the long waits in Tijuana for folks wishing to seek asylum in the U.S. Many wait months for their number to be called, then are held with others in the “ice box” with only one layer of clothing permitted and not enough space for everyone to lie down. Sue urged us to contact our federal officials, since many are not aware of these horrendous conditions.

Before supper, we heard from Malachy Killbride, Executive Director for the National Campaign for a Peace Tax Fund & Bill Galvin, Counseling Coordinator for the Center on Conscience and War. Both shared their work experiences in DC. Malachy advocates for U.S. federal legislation that would enable conscientious objectors to war to have their federal income taxes directed to a special fund which would be used for non-military purposes. He is currently focusing on recruiting Republican sponsors, some of whom agree with the religious freedom aspect of the bill. 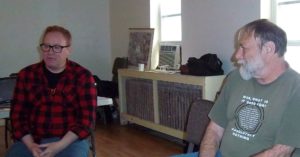 Malachy Killbride (left), Executive Director for the National Campaign for a Peace Tax Fund & Bill Galvin (right), Counseling Coordinator for the Center on Conscience and War.

Bill Galvin discussed the chaotic situation of selective service since a court recently decided that women cannot be excluded. He also shared his experience of counseling folks wishing to leave the military because of their conscientious beliefs. There are usually about 30 men and women going through the process at any given time. It takes 6-12 months for military personal to be discharged for conscientious objection and most applicants are successful in their cases.

After supper, Anne Barron of the San Diego Peace Resource Center led a peace economy workshop, in which we imagined a society with a more local economic focus that respected the needs of all. 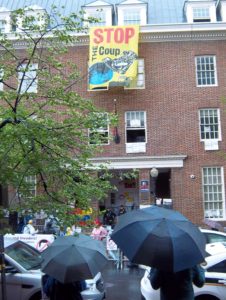 This conference really brought out the global impact of our federal tax dollars, from the militarization of the southern border, to the funding of pro-US regimes in eastern Africa, to the very real possibility of a U.S. backed coup in Venezuela.

A special thank you to Outreach Consultant Chrissy. The planning of this conference was a joint effort and her contribution made this a wonderful conference. I look forward to seeing everyone in Corvallis, Oregon in November!