I am incredibly excited to have this opportunity to work with NWTRCC in the role of Outreach Consultant. The position involves strengthening and publicizing War Tax Resistance through social media and field organizing. War Tax Resistance has been more of a focal point since joining the Administrative Committee in 2016 and hosting the May gathering in St. Louis in May 2017.  I look forward to expanding NWTRCC’s focus of  anti-oppression work and collaborating with liberation-oriented groups especially in our redirection efforts. In the rest of this post, I would like to share with you some of my background.

It was  NWTRCC’s literature and presence at the School of the Americas in November 1998 that led me to the path of war tax resistance while I was still in college. A month after I returned from that pivotal journey, I decided to move into St Francis Catholic Worker community in Colombia, Missouri. The community had a strong tradition of direct action against militarism while also tending to those impacted by war–veterans struggling with mental health and substance abuse issues.

After a few years at St Francis, I returned to my hometown of St. Louis to pursue a social justice organizing position. I began working with the Peace Economy Project, a group working on disarmament issues a few days before September 11th, 2001. The work quickly expanded as we increased local peacemaking efforts with the creation of the Instead of War coalition. I began working more closely with Voices in the Wilderness to better understand the human impact of war and was invited to join their delegation to Iraq in conjunction with Veterans for Peace in May 2002.

Upon my return, I helped organize many public events, spoke of my experiences in Iraq and organized direct action campaigns at Boeing which was operating around the clock to replenish the “smart bomb” supply. I also invested more of my time and energy in creating alternative structures by helping start the Carl Kabat Catholic Worker House. I initiated the first Midwest Catholic Worker Resistance Gathering at Boeing, which happened 3 days into the “Shock and Awe” campaign. Later that year I traveled to Palestine and joined the Wheels of Justice bus tour speaking about the realities of war in the occupied territories of Iraq and Palestine. In 2004, I worked on the creation of the “Merchants of Death” speakers series, a project of the War Resisters League. 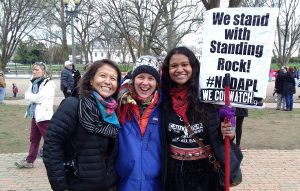 My commitment to War Tax Resistance continued to be a major influence on decisions I made of where I invested my time and energy. I was inspired to focus more in life supporting structures and pursued organic farming and permaculture. In June 2014, I purchased a home to create the Dick Gregory Catholic Worker to honor the St. Louis native who incorporated humor in his approach to resistance. In August, so much dramatically changed with the killing of Michael Brown in the neighboring suburb of Ferguson. Many of us, who had been engaged in organizing work, began to understand the necessity of doing community building in a radically different way.

NWTRCC has been growing into this wider community building by making explicit that many of the ills of society are an extension of our militarized culture. I am extremely excited to be taking on this work at this time with all of you as we seek ways to collectively expand our networks with others who are creating the world in which they want to live.

7 thoughts on “It’s Definitely More Than a Paycheck”