I find myself torn once again between getting myself out the door to be at a demonstration versus doing all the personal and behind-the-scenes political projects that are piled up around me. 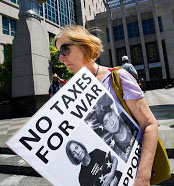 The IRS took Cindy Sheehan to court in 2012 for her refusal to pay for war.

This weekend is the Women’s March on the Pentagon, a protest initiated by Cindy Sheehan and inspired by the 51st anniversary of the 1967 march on the Pentagon — a spirited event with a turnout of 50,000 on October 21, 1967. Such a turnout is exceedingly unlikely this weekend, despite the couple hundred individual and group endorsers listed on the website, including our own National War Tax Resistance Coordinating Committee.

Within our war tax resistance network, initial interest in having a group presence there has dwindled to whether I’m going to get myself out the door and to DC with some lit and my “divest from war” sign for the Saturday workshops and Sunday march and rally. (There is still time to let me know if you will be there!) The travel to DC — whether by car, bus, or train — is one of my least favorite. But being in a crowd of whatever size with like-minded folks keeping the antiwar movement present will probably still entice me. It has also prompted me to reflect on the great Women’s Pentagon Actions of November 1980 and 1981 and WRL’s Day Without the Pentagon Action in October 1998 (you can listen to some of the speeches in the Democracy Now archive, including war tax resister Clare Hanrahan!).

The war tax resistance movement, such as it is, has always had a tension between taking the action for personal reasons and being part of a more public group of resisters. I have generally seen that people come to war tax resistance because they have been active on antiwar/ justice issues for some time, and the growing conflict between working for change and paying for the status quo (or worse) has led them to tax resistance. That often means they are already active with another group that is usually their primary activist outlet.

I expect there will be many WTRs at the Women’s March on the Pentagon, and there will be signs demanding “no taxes for war.” I will have some people ask for literature or how to resist. And at the next NWTRCC gathering there will be a discussion about outreach and effective strategies. Being at demonstrations will probably be low on the list, though it still makes sense to me that people who show up at demonstrations are more likely to be ready resist than those “liking” WTR posts on social media. It is hard to quantify though, so we try to do some of everything.

There are other gatherings this fall that will include discussions about personal WTR and WTR outreach and organizing, including the annual New England Gathering of War Tax Resisters and Supporters and Maine War Tax Resistance Gathering. You can find info about both of those events on NWTRCC’s Programs and Gatherings page — and you can ask that your local or regional events get posted there too.

Meanwhile, I’ll continue the fight with myself about getting to DC. If you see my photos on Facebook next week, you’ll know if I got there or not!

P.S. All credit to The Clash for the title of this blog!

2 thoughts on “Should I Stay or Should I Go?”