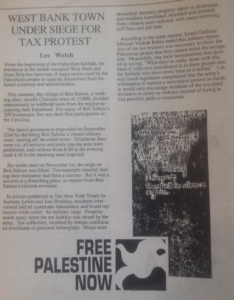 Conscience, the newsletter of the Conscience and Military Tax Campaign (CMTC) from 1980 to 1995, covered the Palestinian tax resistance multiple times. Part 1 addressed 1988-1989’s coverage. The next mention of Beit Sahour, a center of such resistance, occurred in “West Bank Town Under Siege for Tax Protest,” in Conscience‘s Winter 1990 issue (#36), by Les Welsh:

“This summer, the village of Beit Sahour, a working class, mostly Christian town of 15,000, decided unanimously to withhold taxes from the regime occupying their homeland. For many of Beit Sahour’s 320 businesses, this was their first participation in the Uprising.

“The Israeli government responded on September 22nd [1989] by declaring Beit Sahour a ‘closed military zone’, sealing off the entire town. Telephone lines were cut, all services and entry into the area were prohibited, and curfews from 6:30 in the evening until 4:30 in the morning were imposed.

“Six weeks later on November 1st, the seige [sic] on Beit Sahour was lifted. Townspeople cheered, feeling their resistance had been a success. But it was a success at a disturbing price, as reports from Beit Sahour’s citizens revealed.

“In articles published in The New York Times by Anthony Lewis and Joel Brinkley, residents interviewed told of systematic harassment and brutal repression while under the military siege. Property worth many times the tax liability was siezed [sic] by the army. Tax collectors, escorted by troops, confiscated truckloads of personal belongings. Shops were ransacked, business property taken or destroyed, and residents humiliated, bloodied and arrested. Forty citizens were indicted, with many receiving still fines and jail time.

“According to the same reports, Israeli Defense Minister Yitzhak Rabin stated that military repression of the tax resisters was necessary to show the Palestinian people that they cannot resist the occupation. Meanwhile, one local business man was quoted as saying, “What they’ve really done with this kind of collective punishment is to draw people into the Intifada who have never been in it before.” Liberal Israeli legislators complained that the army’s willingness to repress a nonviolent protest so harshly would only encourage residents of the occupied territories to resort to violence instead of trying to find peaceful paths to resolution.”

“Under new military orders issued during the Intifada, tax collection officers are authorized to ‘overcome all resistance’ and to break into buildings and property ‘by force,’ without a warrant and often under cover of night or a curfew. Tax collectors are well documented as having frequently used violence and intimidation, collective punishment, pressure on third parties, illegal confiscation of ID cards, arbitrary levels of tax assessment, and first-time assessment of taxes without warning as a harassing measure. In addition, the mew measures permitted the setting up of road blocks at which tax receipts are checked and cars and drivers licences confiscated until taxes have been paid. Bureaucratic procedures, e.g. registration of births, are also linked to proof of tax payment. In November 1990 the Civil Administration even went so far as to link the distribution of the very limited supply of gas masks before the Gulf War (50,000 masks were available to the 1.7 million Palestinian inhabitants of the occupied territories) to proof of tax payment. Repeated incidents have also occurred when wives and children have been held in custody until their husbands or fathers could produce proof of having paid their taxes. All these methods of coercion are illegal under international law.

“The Beit Sahouris remained steadfast under this intense pressure. They reorganized their lives, developing an alternative system of doing business. [Palestinian community activist] Mr. [Elias] Rashmawi described his experience. ‘We had the sense that our nonviolent struggle had created dignity and courage, something tremendous that no military machine in the world could destroy. People were confronting the soldiers unafraid. There was total solidarity, sharing and caring. We shared everything. Beit Sahour is written with letters of gold in the history of nonviolent resistance. And we are still fighting, still appealing to the Supreme Court and exposing the illegalities and violations of human rights.’ “

I find myself wondering what hell would break loose if the U.S. government attempted to enforce tax law with military force today. Surely, it would be a delegitimizing action for the U.S. government? And yet, Beit Sahour endured a stunning amount of repression, forcible seizure of property worth far in excess of the taxes owed, and all to finance their own oppression – and yet remains under Israeli control to this day. The occupying force has maintained its power. 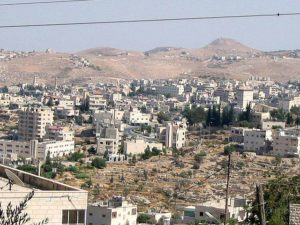 Of course, the circumstances are notably different between the resistance employed by WTRs in the U.S. today, and that employed by Beit Sahouris in the West Bank in the late 80s and early 90s. And today’s struggles, while not visibly employing tax resistance (that I know of, anyway!), still have higher stakes for Palestinians than WTR does for most U.S. citizens.

But what I think I can say, without too much hedging, is that when a geographically contained community bands together in resistance, its voice is louder, more powerful, and more threatening to the powers that be than a scattering of tax resisters across the country.

Some of the big stands by communities of U.S. war tax resisters have certainly made a splash. In fact, there’s a conference coming up November 16-18 in Massachusetts to remember and evaluate one of the biggest WTR actions in the U.S. – the Colrain house occupation action – which actually also began in 1989. For more information and to register, see our Gatherings and Events page.

In an upcoming blog post we’ll explore some of the coverage of the Colrain action in Conscience, so stay tuned!