Welcome to the 2nd in the Conscience and History series! In each of these posts I’ll explore a little bit of the Conscience and Military Tax Campaign (CMTC)’s newsletter, Conscience, which was published from 1980 to 1994. The newsletter was continued as Nonviolent Action (1995-2007) by the Nonviolent Action Community of Cascadia (NACC), which ran the CMTC Escrow Account until it moved to St. Louis. (For more on the CMTC Escrow Account, which is now in the process of closing down and transferring its funds to other alternative funds, see this archived page.) 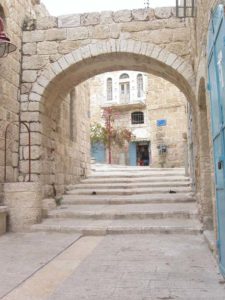 When WTRs discuss historic international examples of war tax resistance or tax resistance in general, Beit Sahour (pronounced roughly “Bait Sah-HOR,” or listen to a pronunciation) is often mentioned.  This West Bank town’s bold resistance against the Israeli government resulted in an infamous 42 days of military-enforced curfews, property seizures, and other repression in 1989.

However, Beit Sahour was organizing against the occupation before and after 1989, and also suffered severe consequences at other times. The 1989 resistance didn’t just arise out of nowhere!

From the issues of Conscience in my possession, the first mention of Palestinian tax resistance against the occupation was in Winter 1988 (#29). In a short piece, Rich Wood reported that Palestinian leaders were calling for tax resistance, boycotts, and strikes.

Wood then traveled to Palestine in August 1988 and wrote “Tax Resistance for Independence in Palestine” for Conscience‘s Fall 1988 (#32), reporting:

“The mostly Christian population of the village of Beit Sahour, near Bethlehem, in the West Bank, has carried out the most well-known campaign of tax resistance during the Uprising, achieving almost unanimous refusal of income taxes, license and permit fees, and the Values Added Tax (VAT is a sales tax) through August. These villagers have suffered a wide range of collection efforts such as imprisonment, the closure of businesses, confiscated automobiles, house searches and beatings, withheld permits and IDs, and extensive curfews.

“Tax resistance exemplifies the movement toward economic independence and development in the Uprising which receives so little western media attention, but presents the Israelis with perhaps the most significant challenges to their continued control over the Palestinian population. In July, the crops and animals being raised in Beit Sahour were left to die when curfews were enforce [sic] by Israelis, with the expressed purpose of preventing self-sufficiency. One villager who persisted in tending his garden was shot to death. Hundreds of the inhabitants then turned in their ID cards and non-violently occupied the Israeli civil administration offices in protest. Thousands of others gathered in support of those inside the offices. The Israelis responded with the now-familiar mass arrests (over 200), administrative detention for the community’s most outspoken leaders (6-month sentences), shootings, beatings, and the demolition of houses.

“In my travels and interviews with Palestinians in August, I found tax resistance to be very common, although not as well organized as in Beit Sahour. The level of tax resistance in the community seems to be indicative of the level of community organization as a whole. However as in the U.S., there are obvious obstacles. Approximately half of all Palestinian wage-earners from the Occupied territories travel behind the “Green Line” (into Israel proper) to work and most frequently have taxes deducted from their checks automatically. Of course, in addition to making roughly half as much as an Israeli worker, the Palestinian worker receives none of the benefits the taxes provide. As in other colonized nations, taxes have come to represent the injustice and illegitimate authority of occupation.”

(The 1988 uprising and repression in Beit Sahour is described in more detail in this pamphlet, “Non-Violent Tax Resistance in Beit Sahour,” from the Palestinian Centre for Rapprochement Between Peoples.)

The tax resistance in Beit Sahour was due to a high level of community cohesion, organization, education, and solidarity, something that’s missing from our scattered war tax resistance organizing around the United States. Most of our finest moments in US war tax resistance arose from such concentrated and dedicated efforts in a small geographic region, even when the total number of resisters was small. Food for thought!

In next week’s edition, I’ll share excerpts from two more reports in Conscience after the 1989 repression.