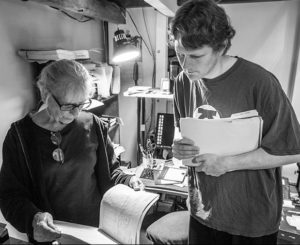 Ruth and Lincoln Rice studying the files in preparation for the office move. Photo by Ed Hedemann, May 2018.

As Erica mentioned in her post last week, I’ve been clearing out old war tax resistance files and sorting those that will go to the Swarthmore College Peace Collection.  Along with many other peace groups — War Resisters League, National Campaign for a Peace Tax Fund, Women’s International League for Peace and Freedom — NWTRCC sends our newsletters, audio-visual materials, literature, and other organizing papers to the archive. The Peace Collection also saves our website periodically, so that online information will be available to researchers.

Going through the files is quite a project, and you have to be very disciplined to press along and not read every note, every flyer, and every letter sent to the IRS or elected officials with a copy to NWTRCC. The queries are deeply moving as people struggle with their anxiety about their money being used to kill.

The letters to the IRS make me so proud to be part of this community of resistance and refusal. In a 1992 letter to the IRS with the family’s 1040, Minnesota resister Hanno Klassen (1920-2004) writes: “…since Vietnam we have frequently refused to finance the U.S. aggressive killing machine. This money is now not only killing the human race, but also our planet and the creation on earth.” That year Hanno sent two checks to the IRS; one was made out to the IRS for part of the taxes due, and the other was made out to the Civilian Casualty Fund for victims of the first Gulf War. He wanted to prove to the IRS that they paid their taxes in full, but asked the IRS to forward the second check to the Fund. Instead the IRS stamped “INTERNAL REVENUE SERVICE” over the Casualty Fund name, and Hanno’s bank put the check through. He protested the processing of a counterfeit check to no avail. 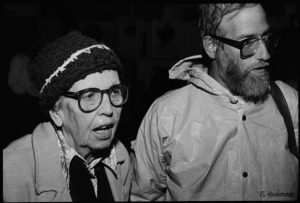 Poking into the files means being reminded of so many people who are now gone. I was happy to see again a letter from another longtime resister Lou Waronker (1942-2014). He had included a quote by Wendel Bull from the newsletter of Peacemakers — the quote that inspired Lou to become a war tax resister in the 1960s:

“Talk is cheap. I find no fault with officers of government, who brush off the pleadings of peace advocates, so long as collections from that same source are steady. Money talks. It is the individual taxpayer’s carte blanche to his duly elected and appointed officials. This I must not give.”

I had created a few files dedicated to notable individuals, and one of them was for the South

African poet Dennis Brutus (1924 -2009). When he contacted NWTRCC in 2004, Dennis was a professor emeritus in the Departments of Africana Studies and English at the University of Pittsburgh, and the IRS was after him for refused taxes. He sent his Statement of Tax Resistance to them and others:

I am prepared to pay taxes where these are due but have decided not to pay taxes that will be used to purchase arms for immoral and unjust actions such as the invasion and occupation of Iraq, among many other actions. I am prepared to become a Tax Resister to protest the use of taxes for unjust and immoral military action. I am willing to pay legitimate taxes, if this can be agreed upon, and have asked to know what percentage of my taxes will be used for military purposes and have not yet received information.

It was especially exciting when his notes came with a handwritten poem. This was a favorite.

I could get quite melancholy, but then some other tidbit will perk me up, like what former NWTRCC Coordinator Karen Marysdaughter wrote in her memorial service tribute to Marion Bromley (1912-1996):

When I think about life after death, I tend to think it probably needs organizing, too. So I’m glad to know Marion has gone on ahead to get things going there, just as she did here. It’s so much nicer not to have to start from scratch!

And that is what archiving is about too: Reminding those who come after that they don’t have to start from scratch. 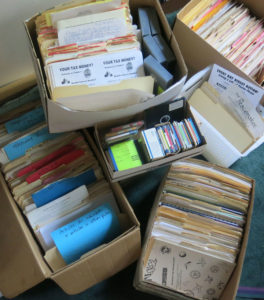 Yup, those are floppies and zip disks…backup files of the newsletter from back when.