“The I.R.S. Should Go After Trump” was a headline on an op-ed piece in the New York Times  that jumped out at me the other day. In part I’m always interested in articles about the IRS, and it did impart some good information on their practices. It also reminded me of all the brouhaha around Trump not releasing his taxes and those who said they would not pay until he did so. 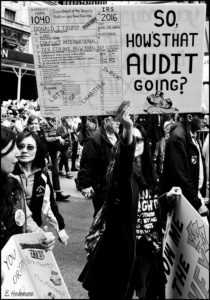 The author, Phillip Hackney is a former lawyer for the chief counsel of the IRS, so he knows something about the inner workings of the agency. His piece was inspired by the New York State attorney general going after the nonprofit Trump Foundation for using a charitable organization for personal purposes (“self dealing”) and violating campaign finance laws among other things. The state has filed a lawsuit, but Hackney thinks there is plenty of evidence to file criminal charges against Trump and/or the Trump Foundation and his responsibility related to 990 tax forms he signed on behalf of the Foundation.

The article goes into some detail about what it takes for the feds to file criminal tax evasion charges: “The government must show that the defendant willfully failed to pay a tax he owed and acted to disguise or attempted to disguise that evasion. For a false statement charge, the government must show that the defendant willingly signed a return under penalties of perjury, making a materially false statement that he knew was false.” He goes on to say that these charges are not always easy to prove and that the IRS and Treasury Department save criminal charges for “notorious and continuous violations of the law.”

There are fines and civil penalties — of which war tax resisters (WTRs) are quite aware — that can be enforced instead.  With experiences during more than 70 years of the modern war tax resistance movement, we know that the government relies heavily on their power to intimidate and their power to levy and seize rather than take WTRs to court. The fact that many of the most open resisters file their forms and announce their refusal to pay with letters and public statements makes it difficult for the IRS to charge us with evasion. It happens, but not much (see our Consequences page and the linked charge of resisters taken to court).

The question of charges related to false statements is of interest also. In the 1970s the IRS did go after 15-20 WTRs for filing false or fraudulent W-4s, i.e., taking extra allowances to lower withholding and signing the perjury statement on the form. Now the IRS does a better job at matching W-2 forms and income filed on 1040s to determine if the W-4 is incorrect. Rather than bring criminal charges the IRS demands that the employer change the allowances on the W-4 to 1 or a number the employee can prove to the IRS is accurate based on tax law.

Hackney says the false statements charge is one of the most difficult for the IRS to prove, though it’s easier to argue ignorance if you are not on record saying, “I know our complex tax laws better than anyone who has ever run for president.”

But I’m not on the edge of my chair thinking Trump is going to be indicted soon on any of the myriad charges we’ve heard are possible. And I’m not necessarily pressing for the IRS to enhance their criminal enforcement, since a lot of people think we are tax evaders also. (Although when WTRs were taken to court it was easier to organize a visible campaign than when the IRS issues a salary levy.)

Still, mostly I’m thinking about all those people during the campaign and on tax day 2017 who were threatening not to pay because of Trump’s tax-release evasion. Did people who said they would not pay actually follow through? Is there any way for us to tell?

4 thoughts on “The president, his taxes and the resistance”