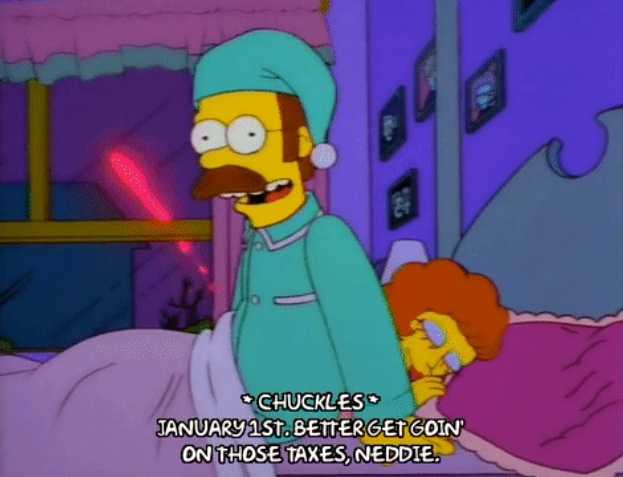 Every year since becoming a war tax resister, it has taken me longer and longer to file my taxes. I used to be one of those people who filed their tax return in late January, early February. I was only somewhat less serious than Ned Flanders in the Simpsons episode, “The Trouble With Trillions” (S9E20). Ned wakes up at midnight, January 1, to start doing his taxes, and mails them when the post office opens in the morning. (Okay, so usually the IRS doesn’t even release the prior year’s tax form until sometime later in January, but that’s a small detail.)

But I always fill out my tax return accurately. Personally, I’m not looking for extra trouble with the IRS beyond my refusal to pay for war.

For example, I don’t employ Homer Simpson’s panicked tax fraud strategy in this episode, when he discovers it’s Tax Day and he hasn’t filled out the return yet:

Homer: Marge, how many kids do we have? Oh, no time to count. I’ll just estimate- uh, nine.
Marge: Homer, you know we don’t have-
Homer: Shut up, shut up! If I don’t hear you, it’s not illegal. Okay, I need some deductions. Deductions- Oh! Business gifts! Here you go. [hands Marge the sailboat painting on the wall] Keep using nuclear power.
Marge: Homer, I painted that for you.
Homer: Okay, Marge, if anyone asks you require 24-hour nursing care, Lisa’s a clergyman, Maggie is seven people, and Bart was wounded in Vietnam. 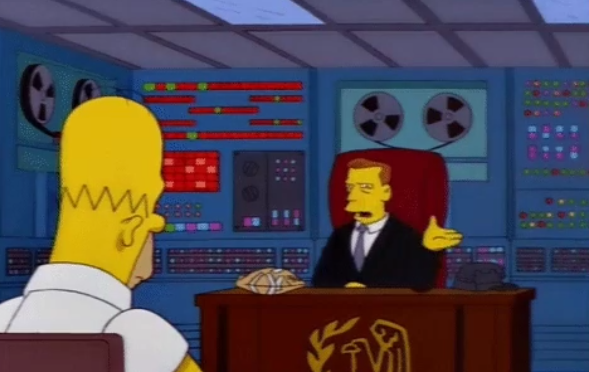 It doesn’t take long before the government arrests Homer for fraud and an IRS agent tries to intimidate him.

Agent: Mr. Simpson, this government computer can process over nine tax returns per day. Did you really think you could fool it?

The agent threatens him with five years in prison. This isn’t the actual process the IRS takes with potentially fraudulent returns (fraud cases typically go to tax court and don’t result in immediate arrest).

Homer says he’ll do anything to avoid prison, and that’s how he ends up as an FBI informant, going undercover as a reporter. He’s looking for a trillion-dollar bill that Mr. Burns (the richest man in Springfield) is hiding, and gradually wins Burns’ trust. When the government agents burst in on them, Mr. Burns exclaims:

Every year you make hardworking joes like my reporter friend here pay income taxes. And for what? Aid to ungrateful foreigners, do-nothing nuclear missiles, tomb polish for some unknown soldier.

In fact, foreign humanitarian aid is a tiny percentage of the budget compared to those nuclear missiles and war memorials (and all the accompanying military spending to support it). However, a lot of folks seem to think that the U.S. blows its budget being generous to other countries.

So, there’s a lot of comedic embellishment and exaggeration going on here, but there are also grains of truth sprinkled throughout this episode:

NWTRCC doesn’t advocate Homer Simpson’s last-minute “if I don’t hear you, it’s not illegal” tax strategy – or Ned Flanders’ “pay the government as quickly as possible” strategy. We’re here to support new and continuing war tax resisters with information and community, so you know the risks of the strategy you choose.

To quote Mr. Burns again, “Tell the people! Don’t let the government push you around! You have a choice.” I don’t tend to agree with greedy rich capitalists, but I agree with that statement wholeheartedly. No more taxes for war!