(In Part 1 of this story, Jason was among nine people [the Aegis 9] arrested for alleged “criminal trespass” at the Bath Iron Works warship facility on April 1, 2017. Jason also testified at a Maine legislature Taxation Committee hearing about a bill that would give $60 million in tax breaks to General Dynamics.)

There’s a long history of opposition to building weapons at the Bath Iron Works facility. One of my codefendants in this trial entered the shipyard as a teen in the 90s and dumped blood on a warship. Previously, Daniel Berrigan, Vermont WTR Daniel Sicken, and others successfully performed two Plowshares actions at the yard. There have been vigils organized by Smilin’ Trees Disarmament Farm from Hope, Maine during Advent and Lent for at least 15 years. Last October, we flyered every house in Bath (and the high school, which was a fun and uplifting place to be on a Friday afternoon) during our Maine Peace Walk for Conversion, Community, and Climate.

In fact, three of the defendants in the Aegis 9 trial – Russell Wray, Bruce Gagnon, and myself – had one year earlier stood trial and been found guilty of the technical violation of the minor crime of Obstructing Ye Olde Public Way in a similar action, for which we each completed community service. Thirty hours, I think it was. (Editor’s note: Jason wrote about this trial here on the NWTRCC blog.)

The Aegis 9, with Jason Rawn on the right dressed up as Senator Angus King in a baseball hat, sunglasses, and suit jacket. Photo from video by Regis Tremblay, Stop Corporate Welfare at Bath Iron Works.

As for the Aegis 9, since the state failed to make its case and since the charges were subsequently dismissed by the judge, we defendants were all denied the opportunity to vigorously defend ourselves. I don’t think any of us actually complained about it, but it was a bit anti-climactic to have our charges dismissed without having to break a sweat. But also exhilarating to be part of a significant First Amendment trial where the Constitution triumphed over US/corporate war makers and their local enablers.

This alleged technical violation occurred within the much more important context of ongoing crimes by the US government and some of the corporations who profit from it.

To fully appreciate the political, financial, and criminal context in which this alleged violation occurred, we can look briefly at related current events in Maine.

Just last week, a full-time employee of the Nestle corporation was installed on the Environmental Protection Board, despite the obvious conflicts of interest of having a paid employee of a corporation intending to continue making money by extracting Maine’s water on the very government board charged with protecting that water.

A second example directly related to this case involves a Corporate Welfare Tax Scam bill, LD1781. This bill would give $60 million MORE in tax breaks to General Dynamics, the corporate owners of the shipbuilding facility in Bath. General Dynamics has already coerced over $200 million from Maine taxpayers over the years. This is in addition to the over $12 billion they received from US taxpayers last year alone.

General Dynamics is a corporation that never stops making money as they and their government collaborators plan and prepare for war.

It’s these ongoing criminal activities that are the crimes worth examining and responding to.

We have a rich history of Civil Disobedience in the US: Thoreau and his night in jail, the women’s suffrage activists, the Civil Rights movement, the years of concerted effort that helped end the war in Vietnam. We learned about these things in school. There have even been a number of CD activities that have taken place in the shipyard here in Bath over the years. At least one of those trials resulted in charges that were dropped the morning the trial was scheduled to begin. [Objection. Sustained. Pause.]

I’ll conclude by saying that this case and the defenses you’ll hear are very similar to cases that have appeared in front of juries all over the country throughout the past decades. Sometimes they have led to a Guilty verdict. Sometimes Not Guilty. Sometimes a hung jury.

We will work hard to provide you with the relevant facts of this highly-significant case. (Many eyes are on General Dynamics at the moment.)

Inspired by the work of Francis A. Boyle, particularly Protesting Power: War, Resistance, and Law, I had been excited to make my case in front of a jury of my peers. Boyle writes that “it is the American criminal jury system that shall prove to be the last bastion of democracy, the rule of law, human rights, and the U.S. Constitution against the Bush (sic) administration’s pernicious assault on all of them.”

I enjoyed the opportunity of making a 5-minute opening statement during which I began providing the context necessary for the jury to more fully appreciate the facts of the case. I was able to use events in Maine from the previous week – the installation of a full-time corporate operative from Nestle onto our state’s Environmental Protection Board as well as the shameless corporate welfare bill – to show the reality of corporate rule in our state.

And then I would have hit it out of the park during my testimony, except the court decided further testimony wasn’t necessary, due to the fact that the state failed to make its case against us. 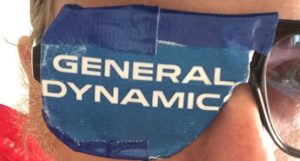 The court found that ultimately, we were denied access to the General Dynamics facility because we were involved in “lawful political expression” guaranteed by the First Amendment.

“The City of Bath needs to consider the legal standards that apply to this kind of activity,” ruled Justice Daniel Billings. “There have to be standards if they’re going to deny people access to the public streets.”

Here’s a video of the ruling of Justice Billings.

So now we’re working to defeat the most recent $60 million Corporate Welfare Tax Scam bill to surface, LD1781. And even though people are still as scared as usual to refuse to pay taxes for war, there is a growing list of activists committed to direct action at the next “christening” at the shipyard, including Maine WTR Resource Center’s Ginny Schneider. So far, about 45 anti-war/pro-peace/economic conversion activists have committed to the action, despite the fact that the date has yet to be announced. For my part, I’m on that list and am working on organizing the action and NVDA training(s) in support of the action.

It would be great to link my Tax Day actions to this case and related issues. I’m also looking into getting a transcript to be shared and hopefully used as a binding or even “persuasive” precedent in future trials in Maine and elsewhere in the US. (Anyone know how to go about this ?)

The spotlight is shining on General Dynamics right now. Here are some of the stories currently in the news:

One thought on ““Trespassing” Against War at Bath Iron Works”