On April 1, 2017, 9 of us were arrested at a “christening” of the latest nuclear-capable guided missile destroyer manufactured by WMD corporation General Dynamics at their Bath Iron Works facility in Maine.

It was snowing that day, and I got there late. I had to walk 10 minutes through it from where I parked, and I got pretty wet as the snow turned to sleet. When I got to the protest, my clothes were too wet for tape to stick, so I was unable to attach all the great NASCAR-style corporate logos provided to me as “$en. An-gas King” by fellow protester and WTR Lisa “Power$uit” Savage, who attended the rally as Maine’s senior senator, Susan Collins. (General Dynamics is the biggest corporate sponsor of both these multimillionaires, and has also been very generous to Maine’s other two US Congresspersons, who are also multimillionaires.) We were arrested for Criminal Trespass, a Class E crime punishable by up to 6 months in jail and $1,000 fine. A very common charge against peace activists.

So ten months later, February 1, 2018, we finally went to trial. It ended a day earlier than expected after the state rested. Justice Billings dismissed the charges after attorney Logan Perkins filed a motion to acquit. The state had not proven their case. Definitely a First Amendment victory in Maine. And I was actually acquitted before that because Justice Billings agreed with Perkins that the “outsourced” law enforcement officers didn’t give me reasonable time to comply with the allegedly lawful order to disperse or else be arrested. I think that means that I have earned a Get Out of Jail Free card! I’ll save it for a rainy (or snowy, sleety, or haily) day.

Some would think that a case like ours and a ruling like the one made by Justice Billings would have made the Sunday papers, especially since the General Dynamics weapons manufacturing facility is the biggest industrial employer in the state. Not so. It’s also interesting that in at least one related newspaper article, the date of a key event (the hearing discussed below) was reported incorrectly. I heard from a trusted friend acquainted with the reporter that the date was correct when the story was submitted. Here’s the only article on the trial that I’m aware of having been published in any of Maine’s daily newspapers. 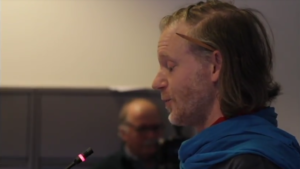 Jason Rawn testifies at the hearing in Augusta, ME. Image from video by Regis Tremblay.

Resistance to US/corporate warmaking takes place at the shipyard and in other locations around the state, including the Capitol. Here is my testimony given at a related Taxation Committee hearing at the State House in Augusta, Maine. We have so far been able to drum up enough opposition to the bill to slow it down. It’s been tabled. There have been 35+ letters to editors in various media around the state. About 20 activists attended the hearing, and 12 of us spoke against the bill. As you might expect, the few who spoke in favor of the bill were paid to do so, or “forced” to do so due to their financial ties to the WMD corporation and its local facility. Only one small union sent a rep to speak on behalf of the bill. Two other WTRs, Alan Clemence and Larry Dansinger, spoke out in opposition to the bill at the hearing. Alan spoke about industry, manufacturing, and engineering, noting that “we have other priorities in this state,” while Larry brought up the possibility of converting the entire manufacturing facility into a cooperative enterprise.

This is what I said about LD1781, a Corporate Welfare Tax Scam bill:

Good Afternoon. I’m Jason Rawn. I’m one of 9 defendants standing trial for First Amendment actions at a “christening” at the GD shipyard in Bath last year.

Additionally, your legislative predecessors (and some of you) have enabled GD to enjoy over $200 million  in “taxpayer generosity” from Maine and certain of its communities over the years.

Additionally, CT, RI, and KY legislators have enabled GD to coerce millions more in “taxpayer generosity” from their states over the years.

Far from being some benevolent, All-American corporation proud to provide good jobs for patriotic Americans in return for their “taxpayer generosity,” GD operates in 46 different countries.

One wonders whether the legislators in the other 45 countries bend over backwards for GD as eagerly as Rep DeChant, Sen Vitelli, and the rest of the proponents of this bill expect you and Maine taxpayers to do?

This bill is not good for Maine.

As one of the poorer states in the Union, we don’t have $60 million MORE in “taxpayer generosity” to spare.

We need to invest in healthcare, education, infrastructure, cleaning up the Kennebec after decades of industrial pollution by GD, etc.

I ask you to show some integrity;

show some vision beyond the short-sighted, pre-packaged vision provided by US/corporate war makers.

Mainers do not want or need Corporate Rule.

Not by Nestle, not by GD, not by any of them.

Our Aegis9 trial was two days after this committee hearing. The 3-minute slot I was allotted during the hearing was a good warmup for the trial….

To Be Continued Next Week!

The spotlight is shining on General Dynamics right now. Here are some of the stories currently in the news:

The Bollard – “Ship of Fools”

If you just can’t wait for the second half of this story, you can go to YouTube or my FB page and check out filmmaker Regis Tremblay’s courtroom footage of Opening Statements (“Opening Statements in Historic Maine Trial” by pro se defendants Bruce Gagnon, Mark Roma, and myself, and by pro bono attorney Logan Perkins), as well as the ruling of Justice Daniel Billings (“Victory for First Amendment”).

And you can check out CODEPINK’s Divest from the War Machine campaign page. Contact them for more information about coordinating your local Tax Day actions with their national and local campaign actions.

Editor’s note: Be sure to see NWTRCC’s Tax Day page and contact us to add your event! NWTRCC affiliates are organizing Tax Day actions with a variety of organizations around the country.

One thought on “End “Taxpayer Generosity” for General Dynamics”