Are you watching the big Ken Burns/Lynn Novick series The Vietnam War on PBS? My friends are talking about it, some are watching it, others, like me, not. I still find the horror of that war too painful to see the footage again. The waste on all levels remains painful and has carried through my life of working against war. In addition, the documentary apparently gives short shrift to the antiwar movement. I was skeptical when the New York Times review said, “The film’s center of moral gravity is ordinary soldiers, whose sacrifice and loyalty to one another are repeatedly contrasted with the political machinations of the powerful, on both sides.” Not the thousands in the streets who saw from the start that the war was criminal and wrong? (See Maurice Isserman’s review, Fall 2017 Dissent Magazine).

I don’t expect war tax resistance gets mentioned, though it was a strong part of the antiwar movement of the time. This led me to grab a little book off the shelf, Ain’t Gonna Pay for War No More by Robert Calvert, one of the earliest, bound guides to war tax resistance. Published in October 1971 — 46 years ago, and still 4 years before the war ended — it included a preface by radical pacifist leader and war tax resister David Dellinger. (Dellinger died in 2004, but is there any sign of footage of him in the Burns/Novick production?)

I’m happy to remember Dellinger at this time, so here’s a germane section from his preface: 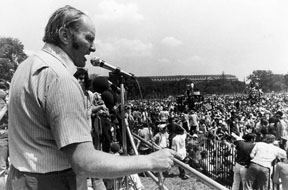 Dave Dellinger in the 1960s, courtesy of War Resisters League

There are two kinds of people who don’t pay income taxes. On the one hand, there are the Ronald Reagans*, the oil millionaires and other wealthy profiteers who manage to manipulate their assets and their tax returns to take advantage of the loopholes for the wealthy that have been created by an upper-class-oriented Congress and I.R.S. Their way of life is the pursuit and protection of private wealth and privilege at the expense of their fellows. Although they may not like to think of it in quite so direct terms, they endorse the napalming of Indochinese peasants and the violent overthrow of governments that seek to put an end to the exploitation of their natural and human resources by American corporations. They support America’s Phoenix plan for assassinating 80,000 Vietnamese villagers who are thought to form the “infrastructure” of the Vietnamese Independence movement — assassinations organized and carried out by methods already perfected by American assassination teams in Latin America. At home, they demand a repressive F.B.I. and Justice Department, a heavily armed and conscience-less National Guard, a system of courts, police and prisons that protect the present extremes of wealth and poverty from the thrust of the poor, the non-white and the believers in a classless society. Their main concern is to avoid paying their share of the costs of the policies they advocate and benefit form financially. 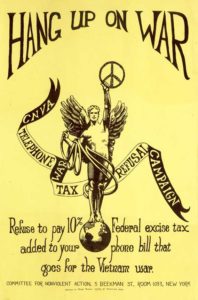 …this book shows how the negative act of tax refusal can be combined with positive acts of promoting and financing alternative projects that become the seedbed of new institutions and relationships. The power to tax is the power to destroy-twice-over. It destroys the bodies of those who fall victim to American firepower and repression. Less dramatically but nonetheless surely, it mercilessly destroys the consciences and humanity of those who willingly surrender their taxes to the government. Alternatively, the power to refuse is the power to preserve life and create hope.

To quote a famous antiwar song, “When will they ever learn….”**

* At that time still governor of California — and another rich person we never expected to be president….
** “Where Have All the Flowers Gone” by Pete Seeger, Wikipedia – YouTube (Pete Seeger, Sweden, 1968)

One thought on “Lifting Up Dellinger and Antiwar Activists”