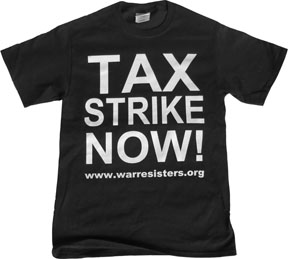 NWTRCC has some shirts with TAX STRIKE NOW! and the War Resisters League website printed on them for sale – $12.

The next five days will be filled with marches, rallies, and strikes against military spending and Trump’s secrecy around his tax returns. April 15 is the Tax March in Washington, DC and around the country, while April 18 is Tax Day. Equally important, many events will mourn lives lost in Yemen, Syria, Afghanistan, and other war zones, and call for truly humanitarian aid and an end to armed conflict. War tax resisters are a key part of these effort. (Read NWTRCC’s Tax Day press release for more.)

Here are just a few of the great events war tax resisters will be at over the next few days. If you don’t see your town listed, see Tax Day Actions for a complete list, contact us with details about any event you’re planning in your town, or join our Facebook event.