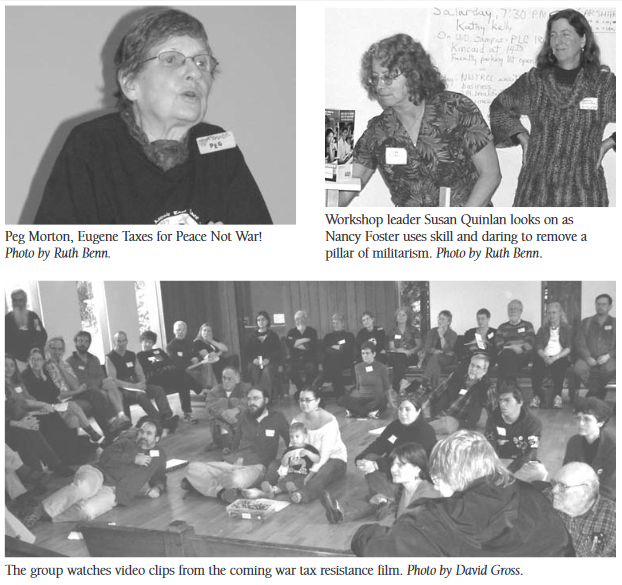 Images from the November 2008 NWTRCC conference that got me started in resistance (click image to see the PDF of the newsletter).

Last week, I was explaining war tax resistance to someone new. They asked how I got started. I talked about attending the November 2008 NWTRCC conference in Eugene. Meeting the knowledgeable and caring NWTRCC community, and having inquisitive and inspiring conversations with a variety of people, was my tipping point to start resistance.

Likewise, this new person was inspired by our personal connection. They enthusiastically e-mailed me almost immediately after our discussion. I don’t know what will come of this new contact – much enthusiasm doesn’t translate immediately into resistance, for many different reasons. But I bet the “conversion rate” is higher for folks who know another resister personally.

Because NWTRCC’s media visibility is higher than ever, I wonder how to take full advantage of this situation. NWTRCC has a decent list of contacts and counselors, but not as many active local affiliates as we’d like!

Are you a new war tax resister, or contemplating resistance? What would help you feel more confident?

And for current resisters:

New and current resisters can call on NWTRCC by phone, e-mail, or social media with questions or concerns. Or surf around our website. We may already be able to provide the support you need! Or we can envision the kinds of work local groups and NWTRCC may be able to do in the future.