For better or worse, I start my day off listening to the NPR news and then listening/watching Democracy Now! Today’s big story was about the release of two pages of Trump’s taxes from 2005 — more all-Trump-all-the-time. Even his 12-year-old taxes get big notice. However, the reporter who received the leaked forms, David Cay Johnston, and attempted to break the story, is very well-informed on IRS issues and always worth reading or listening to. I say that even though I remember that one of our war tax resisters was on an interview show with him some years ago, and he spoke strongly against war tax resistance. I don’t know if he’s changed that tune, but he’s a smart guy anyway. 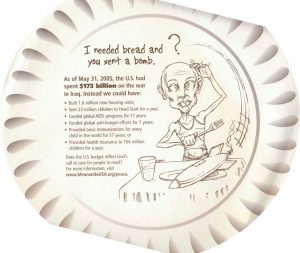 A great flyer in a “paper plate” style produced by the Mennonite Central Committee in 2005. (Scanner could not quite fit the full circle…)

But back to today’s headlines. The other big story on Democracy Now! was about the desperate and growing humanitarian crisis in Yemen, Somalia, South Sudan, and Nigeria, with 20 million people on the brink of famine. The new U.S. federal budget is expected to include major cuts to U.N. programs that provide humanitarian aid — not to mention increases for the U.S. wars, drone strikes, and interventions in all these countries where the U.S. helped to create the crisis in the first place.

So, when we get caught up in the esoteric side of the IRS, details of filing taxes, and worries about “what the IRS can do,” it’s important to remember why we resist in the first place. With these desperate needs in the world, it is unconscionable that billions and billions and billions of dollars and tons and tons and tons of resources are supporting military interventions and wars while even one person starves. Anywhere. My small resistance and redirection is a drop in the bucket next to the needs, but it is better than signing on blindly to these deadly policies.

In relation to this, our friends at Voices for Creative Nonviolence (a NWTRCC affiliate) and New York Catholic Worker have initiated a week-long fast at the U.N. beginning April 10 to demand an end to the bombing and blockade of Yemen. Learn more about the fast and how to join or support it here.

Lately I’ve been doing a number of war tax resistance workshops and talking about the ins and outs of filing and all those details about “what the IRS can do,” so it was good to be reminded of the big issues again. And, if you think jail is a real risk, then it’s always good to remember when Thoreau spent his night jail for refusing to pay a poll tax in protest of war, Emerson visited him asked, “Henry, what are you doing in there?” and Thoreau replied, “Waldo, the question is what are you doing out there?”

P.S. If you are wondering how to join war tax resisters this tax season, see this page for a variety of options to help you get started.

P.S.S. That link on the graphic for the Mennonite peace program is broken, but you can find their information on war tax resistance on this page – https://mcc.org/learn/what/categories/militarism. Mennonite Central Committee U.S. is a NWTRCC affiliate too!

One thought on “Bread or Bombs?”