In May, the Coordinating Committee approved spending funds to pay a field organizer to conduct a survey of the NWTRCC network, figure out ways to support and grow our affiliates, as well as to reach out to new populations that NWTRCC isn’t currently reaching.

In September, after the hiring committee evaluated over 30 applicants and conducted interviews, we decided to offer the work to community organizer and war tax resister Sam Koplinka-Loehr! Avid readers of our blog might remember Sam’s letter to the IRS from last year. 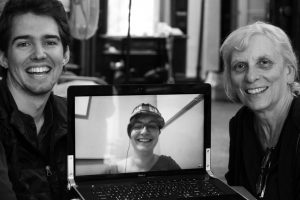 Sam will be working closely with NWTRCC’s two current consultants, coordinator Ruth Benn and social media consultant Erica Weiland. Sam will work part-time from Philadelphia, where they also currently work as a nanny. They say:

“I am currently involved in many direct action campaigns, including fighting police brutality, addressing environmental injustices, and supporting prisoners. I am excited to take on this new active role with NWTRCC! In particular, I am eager to support longtime resisters as well as work to build a more diverse and intersectional WTR movement in the year to come.”

Check out the latest issue of the NWTRCC newsletter for more from Sam, including an invitation to the first NWTRCC community call and ways to contact them.