Somehow the IRS is attuned to vacations and holidays. They like to surprise you with their letters, bills and perhaps stronger demands just when you’re in a good mood or feeling relaxed. Like last week: I came back from vacation to a pile of 10 “Amount Due” letters from the IRS (not sure what our house sitter thought about that). There was one for each year still within the Statute of 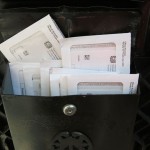 Limitations for collection. Since I file and refuse to pay, the IRS has 10 years to collect from the date of assessment, or about a month after you file (unless they dispute your return or don’t file; then assessment will come later).

So I got a letter for each tax year from 2006 through 2015. Oddly, the IRS used to send one letter that listed each year and added up a total, but somehow the “paperwork reduction act” seems to have backfired and you now get one letter in its own envelope for each year. Maybe they think it’s scarier to get a pile of 10 envelopes.

But then again, there’s still reason to celebrate. Instead of seeing this as 10 dreaded letters, I can be glad that another year has dropped off their demands and is beyond their reach. That was 2005 — one of my bigger earning years — so I’m glad to see that $3,780.64 go away (much of that was interest and penalties; the federal income tax resisted in 2005 was $1,926). Yeah, that probably doesn’t even buy a soldier’s helmet, but I’m in it for the protest and the hope that someday enough protest will lead to actual cuts in the military budget, military intervention, and reliance on the military to “solve” conflicts. 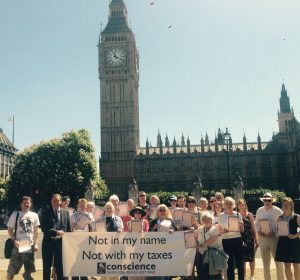 Speaking of the latter – solving conflicts — it is exciting to see that the group Conscience: Taxes for Peace in Britain has made some headway with their legislative campaign. Their Taxes for Peace Bill was read in Parliament on July 19, and it will receive a second reading on December 2.

This introduction to the bill explains what it would do:

A Bill to give further effect to the international obligations of the United Kingdom in relation to freedom of thought, conscience and religion by enabling persons liable to income tax who object, out of personal conviction, to the expenditure of tax revenues on military activity to direct that the relevant portion of the income tax for which they are liable be spent instead on the prevention and peaceful resolution of conflicts; and for connected purposes.
Read a pamphlet about the bill and the text of the bill itself.

The U.S. has its National Campaign for a Peace Tax Fund to create a Religious Freedom Peace Tax Fund. Taxes deposited in the fund by conscientious objectors would “be allocated annually to any appropriation not for a military purpose.”

I’ve always liked how the British campaign includes a plan for a nonviolent alternative to militarized security. Good luck to them; we’ll be watching for what happens next.