After putting the book down for a few months, I recently picked back up my reading of David Swanson’s War Is a Lie, which I got from the author himself at his April 16 appearance in Portland, Oregon. Over this weekend, I think I started to understand why I had put the book down.

Just in Chapter 2, “Wars are not launched in defense,” I learned unpleasant facts about how the US government and military had basically goaded Japan into attacking Pearl Harbor through arming the Chinese, using economic sanctions, and preparing for war in nearly plain sight. 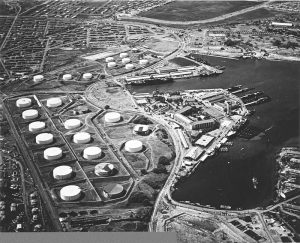 Public domain photo provided by Wikimedia Commons. Their caption: “Aerial view of the Pearl Harbor submarine base (right center) with the fuel farm at left, looking south on 13 October 1941. Among the 16 fuel tanks in the lower group and ten tanks in the upper group are two that have been painted to resemble buildings (topmost tank in upper group, and rightmost tank in lower group). Other tanks appear to be painted to look like terrain features. Alongside the wharf in right center are USS Niagara (PG-52) with seven or eight PT boats alongside (nearest to camera) and USS Holland (AS-3) with seven submarines alongside. About six more submarines are at the piers at the head of the submarine base peninsula.”

It’s not to say that I didn’t know that Pearl Harbor wasn’t the brazen act of aggression we are always taught in school. But Swanson lays out the case so plainly that I found myself disgusted at the way I have been lied to, and disgusted and saddened by the loss of life caused by these lies. And he does this again and again throughout the first 60 pages of the book (that’s as far as I’ve gotten). For example, FDR’s arming of the Chinese military and his administration’s plans to start a war with Japan are exposed:

“As early as 1932, the United States had been talking with China about providing airplanes, pilots, and training for its war with Japan. In November 1940, Roosevelt loaned China 100 million dollars for war with Japan, and after consulting with the British, U.S. Secretary of the Treasury Henry Morgenthau made plans to send the Chinese bombers with U.S. crews to use in bombing Tokyo and other Japanese cities. On December 21, 1940, two weeks shy of a year before the Japanese attack on Pearl Harbor, China’s Minister of Finance T.V. Soong and Colonel Claire Chennault, a retired U.S. Army flier who was working for the Chinese and had been urging them to use American pilots to bomb Tokyo since at least 1937, met in Henry Morgenthau’s dining room to plan the firebombing of Japan. Morgenthau said he could get men released from duty in the U.S. Army Air Corps if the Chinese could pay them $1,000 per month. Soong agreed.” (p. 51)

Just a few pages later, Swanson brings up facts that seemed familiar, but that I had managed to put out of my head for quite a while:

“By 2008, the Bush-Cheney administration had been pushing a case for war on Iran unsuccessfully for years. Tales of Iranian support for the Iraqi resistance, Iranian development of nuclear weapons, Iranian ties to terrorists, and so forth were trotted out with great regularity, and completely ignored or rejected by the American people, over 90 percent of whom remained opposed to attacking Iran. Vice President Dick Cheney and his staff, apparently growing desperate, dreamed up, but never acted on, a scheme that would have made Hitler proud. The idea was to build four or five boats that would look like Iranian PT boats and put Navy Seals on them with ‘a lot of arms.’ They could start a firefight with a U.S. ship in the Straight [sic] of Hormuz, and voila, you’d have a war with Iran. The proposal was reportedly dropped because it would have required Americans to fire on Americans.

“That concern had not stopped the Joint Chiefs of Staff in 1962 from sending the secretary of ‘defense’ a plan called Operation Northwoods that called for attacking U.S. cities and blaming the attacks on Cuba. That these plans were not acted upon does not diminish their value as clues to the thinking of the people from whose brains they emerged. These were people hunting for excuses for war.” (p. 58)

So now I understand why it is hard for me to read War Is a Lie. Even as I think of myself as reasonably aware of the world around me, I realize that grasping the whole truth is sometimes a painful process. Every page is full of reminders that the U.S. war machine is lying to us every day, and every page makes me more certain that many atrocities are still hidden under the surface. Every page increases my understanding of how far warmongers are willing to go, and every page reminds me that resistance is absolutely necessary, but the level of resistance we have is insufficient, for systemic change.

P.S. Even as we work to end war, we find that history is reported quite differently by people depending on their perspective. For an opposite view on Pearl Harbor, check out “How Roosevelt Attacked Japan at Pearl Harbor: Myth Masquerading as History.” (I have not read it thoroughly so can’t offer an opinion on its veracity or lack thereof.) We also have had some discussions on the wtr-s e-mail discussion list about a widely disseminated article reporting the war crimes exoneration of Slobodan Milosevic: see this message and the thread , a followup, and another response.

One thought on “Unpleasant truths about preemptive strikes: War Is a Lie”