Last year on tax day in New York City there was a long line of people outside the IRS waiting to get inside for forms or to have questions answered. This year there was no line at all. Does that mean the IRS was more efficient? Or was it because people didn’t really notice that the final day to file this year was April 18 (or the 19th in Maine and Massachusetts), so many people had things done by April 15?

Whatever the reasons, we had a good group out with signs and banners and handed out lots of WRL pie charts:

Photo by Ed Hedemann. Click to enlarge and scroll right and left to view the full picket line. 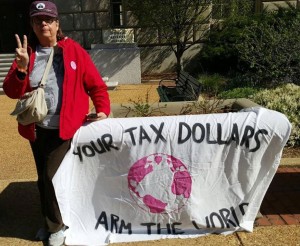 In Washington, DC, on April 15, some of us vigiled at IRS headquarters on Constitution Avenue before joining up with the Democracy Spring protests about money in politics. As we left the IRS and were headed over to Freedom Plaza for a DC statehood rally, Carol Coney was carrying her banner (right). A man passing by looked at it and said, “Do you think there’s something wrong with that? I think that’s how it should be.”

Erica reported from Seattle: “I enjoyed leafleting the National Priorities Project pie chart with Veterans for Peace in Seattle, before heading down to Portland for their tax day events. Favorite moment was watching two women walk off with a flyer with one saying incredulously, ‘only 6% to education???’ It’s always nice to spread some facts.” 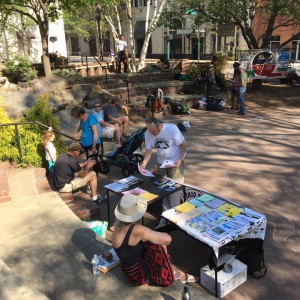 In Asheville, North Carolina, the New South Network of War Resisters took advantage of excellent weather, hung their banner in a downtown park, and set out lots of literature for public consumption.

We don’t know about all the local press coverage yet, but at least some of the tax day related articles that featured war tax resistance included:

“These Lancaster County pacifists refuse to pay portions of their taxes in silent protest of war” from Lancaster, Pennsylvania.

AlterNet World posted “A Friendly Tax Day Reminder: You Are Spending More to Finance the War Machine Than You Might Realize”.

In Oregon, Sue Barnhart had an excellent letter in the Eugene Register-Guard, “Use Taxes to Affirm Life, Not War”, which appeared on the day Eugene Taxes for Life! and other groups were holding their vigil, penny poll, and redirection ceremony at the downtown post office. The Raging Grannies singing may have drowned out the sound of a train rolling through town carrying military vehicles, which could be seen from the vigil. 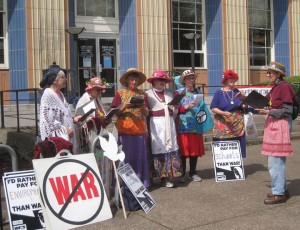 In addition, David Zarembka’s article “God and Caesar: On war tax resistance” was posted on the AFSC Acting in Faith Blog, and the international news outlet teleSur featured an article on April 12, “No More Money for War: US Peace Activists Refuse to Pay Taxes”.

Please send NWTRCC links or hard copy of articles that appeared in  your local press — and email us your photos too.

You can see more action reports and photos on the tax day page of the NWTRCC website and our Facebook pages. We’ll keep adding to the lists as things come in. There are links to articles and interviews under the Media button above, also, including these interviews: Ed Hedemann describes NWTRCC and resistance on Radio Dispatch with the Knefels; redmoonsong talks low income war tax resistance on the Simple Living Works Podcast, Episode 67; and Erica Weiland was interviewed about war tax resistance on Peace Buzz Episode 3.