For years war tax resisters (or potential resisters) have worried about travel abroad. Will my tax debt show up in a passport check when leaving or returning to the U.S.? Despite reassurances that many of us travel abroad and this has not been an issue, the fear lingered in the minds of many. 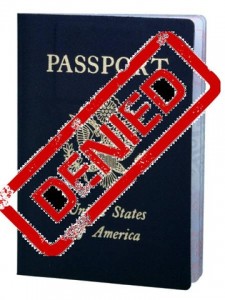 Unfortunately, on December 4, 2015, Congress passed a long-awaited highway funding bill that tucked some IRS-related revenue provisions in the massive document. At least two of those affect war tax resisters — the passport issue and re-institution of private debt collectors for tax debt. For many reasons these are both bad ideas, and in the past have generated widespread controversy. This time the House and Senate let both provisions slide by with limited outcry.

Forbes Magazine online has two very good articles about both these provisions, so I’ll link to them below. Both provisions raise questions about efficiency and privacy that should be worrisome to all taxpayers.

“It is misguided and harmful to taxpayers to use private debt collectors to collect outstanding tax liabilities. When the IRS most recently used private debt collectors in 2006, the program actually lost money. After hearing numerous complaints from a wide variety of taxpayers, many of whom were subjected to harassment and other inappropriate collection techniques, this costly program was terminated. We agree that it is vitally important that we fully finance a robust investment in our nation’s infrastructure. However, we should not pay for that investment by subjecting our taxpayers to these abusive practices. This provision must be removed.”

The rules seem pretty lax about what these debt collectors can do, as you can read in the Forbes article. The IRS is required to turn over collection of “inactive tax receivables” to private debt collection companies. These are debts that are considered still collectible but that the IRS has put on the back burner. With scammers already calling thousands of taxpayers every day and claiming to work for the IRS, this seems like especially bad timing. We will have to see how it plays out in our war tax resistance network.

“Seriously delinquent” is defined as “an unpaid, legally enforceable federal tax liability” when a debt greater than $50,000, including interest and penalties, has been assessed and a notice of lien or a notice of levy has been filed.

So, before letting this halt your resistance, do consider whether you are in the over $50,000 category or have a chance of getting there in the near future. And if you travel and can see hitting that level, perhaps a lower level of resistance is a consideration rather than ending your resistance.

In the face of these challenges, we have to remind ourselves that we are serious about resisting war. If there are consequences to our resistance, so be it.  What we need to do is figure out how to make the most out of those consequences in a way that shows others that resisting war outweighs the risks.

One thought on “New Collection Challenges”