On November 6-8, a small group of stalwart NWTRCC network members gathered in Las Vegas for community time, discussion of outreach tactics, and a vigil outside Nellis Air Force Base. It was a fun time as always. 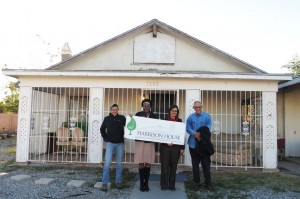 The Administrative Committee met on Friday to review the budget, objectives, and proposals. We finished on time and had time to take a walk around the neighborhood, seeing the beautiful murals of prominent black people in the history of Las Vegas. We also got a tour of Harrison House, which was a popular place to stay for black performers in the 1940s and 1950s, who were prohibited from staying or eating in the hotels and casinos they performed at. The house is now gradually being restored and will become a transitional house for veterans. 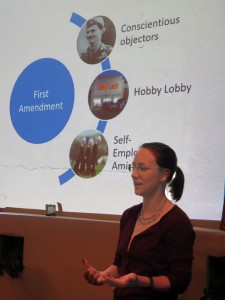 On Friday night, Jennifer Carr, a professor at the University of Nevada – Las Vegas Boyd School of Law, shared her analysis of the Religious Freedom Peace Tax Bill. Her article, entitled “Complicity and Collection: Religious Freedom and Tax,” makes suggestions about changes that may make this bill more palatable to Congress and other people (abstract and download). Her talk was recorded and will be shared on the NWTRCC website as soon as it has been edited! (For more on this issue, see our blog post on Peter Goldberger’s talk in November 2014.)

We spent Saturday morning talking about war tax resistance outreach and updating each other on our resistance strategies. One major topic of conversation was the need to make connections with other groups and to meet prospective resisters where they’re at. Climate change, anti-police brutality, and black-led organizations were some of the groups mentioned as possible connections. After lunch many of us sat down to continue that train of thought, developing thoughts around the proposal for NWTRCC to support affiliates in organizing Tax Day outreach events. 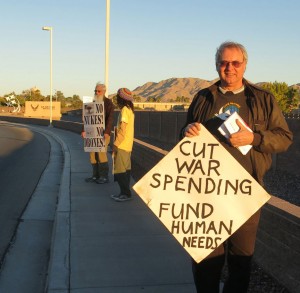 We had debated about where to do our planned vigil in the afternoon. Creech Air Force Base, from where drones are tested and piloted, was just a bit too far from Las Vegas to fit it into our schedule. We settled on Nellis Air Force Base, where some nuclear weapons are kept. Our unannounced vigil drew the attention of base police and local police, but went strong for about an hour, until the encroaching darkness drove folks back indoors for dinner.

After dinner, some folks settled in for the night, while one car of intrepid explorers set off to experience the spectacle of the Las Vegas Strip. (Despite clear requests to win big for NWTRCC at the slot machines, however, the adventurers failed to deliver the $20,000 or even just $10,000 we asked for. Maybe next time.) 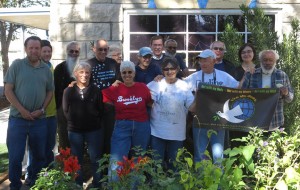 Our Sunday morning business meeting addressed NWTRCC’s 2016 budget and objectives, as well as three proposals for the Coordinating Committee to evaluate. We also discussed a developing comic book proposal. We approved NWTRCC’s largest budget yet, including funds for affiliates to do Tax Day events with other local groups. (Does your local group want to partner with new/existing allies in your area? Contact NWTRCC, since we may be able to help with funds and/or publicity.) We also endorsed Campaign Nonviolence.

Like Jennifer Carr’s talk and a couple of discussions on Saturday, the business meeting was open to remote listening and participation from members of our network, and we had several folks join us throughout. We will continue to provide a “virtual meeting” option as we meet, and also continue to improve our setup and processes! Thanks to all who called in. 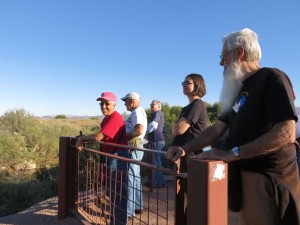 In the afternoon, those of us who were left took a little trip to some wetlands (yes, they have wetlands in Las Vegas), and found ourselves pondering whether a turtle perched on a rock in a pond was a sculpture or real.

Thank you to our host, Las Vegas Catholic Worker, for accommodations, food, and help transporting all of us around Las Vegas. 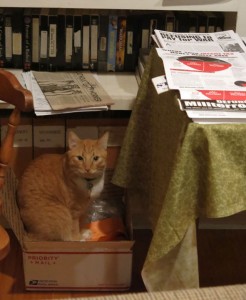 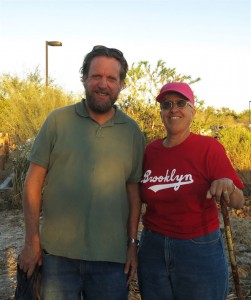