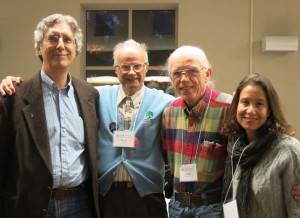 As we’ve mentioned before, we got a recording of Peter Goldberger’s talk on the Hobby Lobby decision from our November 2014 meeting. Now we also have a transcript, which I found absolutely necessary for following the course of Peter’s argument. It’s not an overly complex argument, but seeing it in writing helped me a lot.

Here’s a one-paragraph refresher on the case, in case you need it: Both Hobby Lobby and Conestoga Wood Products (whose cases were joined for the appeal to the Supreme Court) argued successfully that, like non-profits, religious employers, and some other exempted employers, they should be able to get an exemption from providing birth control coverage under the Affordable Care Act. Specifically, they argued that the lack of exemption is not the least restrictive alternative for dealing with the owners’ religious objections, and so it is a violation of the Religious Freedom Restoration Act (RFRA), which holds that

an individual objection to compliance with any law has to be accommodated if it is possible to do so. The way the RFRA rule is framed is in these terms:  the religious objection has to be honored unless (a) the law serves a compelling governmental interest, and (b) the infringement on conscience is the least restrictive alternative for dealing with the problem of objection—the least restrictive of individual liberty that is feasible. That’s a very strict test.

Peter’s main point was that the Hobby Lobby decision creates some potential openings for conscientious objectors to war and to military taxation, even though the Supreme Court referenced the Lee case (edited to add: see link at note 2 for summary of the case) and said that there aren’t such openings. For example, he argues that there is an opening for a religious war tax resister who is taken to court by the IRS, to contest the supposed obligation to pay war taxes under RFRA, and argue for the government to create a peace tax fund. Such a fund, similar to that proposed in the Religious Freedom Peace Tax Bill, would be a less restrictive means of accomplishing the government’s goal of obtaining taxes from individuals than refusing to accommodate them at all. It would not lead to the kind of chaos the justices have generally supposed it would.

However, as some people discussed after Peter’s talk in November 2014, arguing for a peace tax fund on the basis of RFRA could be worse for non-religious conscientious objectors to military taxation than the actual Religious Freedom Peace Tax Bill. The bill states that conscientious objectors may be motivated by “moral, ethical, or religious beliefs or training.” If a religious war tax resister succeeds in creating an exemption for the religious, most of the already limited steam behind the peace tax fund bill will disappear, without obtaining the same right to conscientious objection for non-religious war tax resisters.

And then there’s those of us who are driven by the specific desire to keep money away from the government as an act of resistance. Having the money be filtered through the government’s books differently doesn’t accomplish our goals. I believe the existence of a peace tax fund would not alter in any way the need for people to continue to resist a government that would still spend ~45% of tax dollars, in the aggregate, on war.

One thought on “Does the Hobby Lobby decision matter to war tax resisters?”