A couple of weeks ago, as we were eating lunch on the porch of Casa Maria Catholic Worker, Ruth talked about meeting her mentor in activism, Frances Crowe, in Western Massachusetts. When Frances saw Ruth wearing an anti-nuclear T-shirt, Frances, ever the organizer, came up and introduced herself immediately. 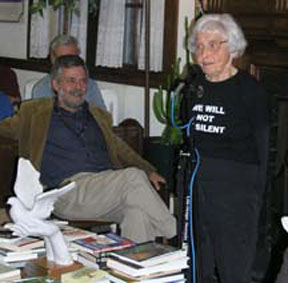 Frances Crowe at the Peace Abbey, May 2007. Peace Abbey founder Lewis Randa seated on the left.

Frances was a long-time staff member for the American Friends Service Committee in Western Massachusetts. She has been arrested 11 times at the Vermont Yankee nuclear plant alone (when asked how many times she has been arrested, she responds, “Not enough”) and traces her anti-nuclear activism back to the dropping of the atomic bomb at Hiroshima. Frances recently published her memoir Finding My Radical Soul (with a foreword by Amy Goodman). Now 96 years old, she is still an activist and still getting arrested for civil disobedience.

During the May 2007 NWTRCC gathering at the Peace Abbey, Frances was awarded the Peace Abbey’s Courage of Conscience award (which has also been awarded to war tax resisters Randy Kehler, Betsy Corner, Kathy Kelly, Julia Butterfly Hill, Cindy Sheehan, and Juanita and Wally Nelson).

Frances came to war tax resistance later in her life, when the Iraq war began in 2003. She said in an article in the May 2005 More Than a Paycheck:

We should be telling people how good it feels to separate yourself from this awful war… I was a total hypocrite, running around talking about these things, and feeling so strongly, while still funding them.

She also talked about the distraction of comforts in modern day society that may keep folks away from thinking about war tax resistance:

The trouble is that people are too comfortable. They are not hungry, and they are so totally caught in by the major media that they’re just shopping and entertaining themselves and feeling that they have to be happy all the time and diverted. I like to be comfortable. I like a warm bath and I like a comfortable bed at night. I don’t like being hungry.

But there is something else also to life, the joy of struggle, that not enough people have tasted. And the joy of community, and the joy of cooperation, instead of competition; these are the values that I want to perpetuate and talk about to young people. There’s a whole other world out there that they can taste that’s a really wonderful community in the brotherhood of humans.

(Even as our social media coordinator, I think this is a big argument for moderating time online or on TV. Media can help us build connections and educate ourselves and others, and it can also entertain us for so much time that it prevents us from taking further action.)

I also recommend Frida Berrigan’s recent article about Frances and her memoir in “Waging Nonviolence.” (My favorite fact learned from this article is that Frances did 1,776 draft counseling sessions in 1968 and 1969!)

P.S. More good news about Frances; she was awarded an honorary degree from Smith College on May 17.

One thought on “Frances Crowe: Finding Her Radical Soul”