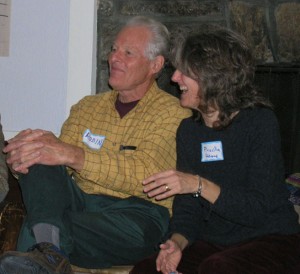 Priscilla Adams (right), next to Robin Harper at a NWTRCC gathering at Swarthmore College, 2004.

Sixteen years ago, the 3rd Circuit of the US Court of Appeals ruled against Priscilla Adams. She asserted that the Religious Freedom Restoration Act (RFRA) should accommodate her refusal to pay taxes that would go to war. However, the court maintained that mandating universal compliance with the tax law was the “least restrictive means” under RFRA of collecting revenue to support the budget, which of course left her religious beliefs entirely unaccommodated.

As written in “RFRA Court Appeals” in the April 1999 More Than a Paycheck:

Lawyer Goldberger argued that the burden of proof was on the IRS to show why it should not provide an alternative to Priscilla to paying for the military, as required by the Religious Freedom Restoration Act (RFRA) of 1993, which remains in effect for agencies of the federal government despite the fact that the Supreme Court found it unconstitutional as a requirement on state and local governments.

IRS attorney Michelle O’Connor argued that because there are just so many religions the IRS could not possibly accommodate them all. Furthermore, she said, Congress has not instructed the IRS to provide exemptions for religious pacifists, therefore they have to use the same system as everyone else.  She stated the government’s view on religious free exercise:  exemptions from penalties can be made when the taxpayer’s situation is “beyond his control.”  However, the government claims that while a person’s religious beliefs may be beyond their control, their actions are within their control, so penalties cannot be waived for religiously motivated actions!

Priscilla had previously taken her case to Tax Court, where she was also ruled against, but there were some aspects of the decision that her attorneys felt left openings for a potential reversal. From More Than a Paycheck, June 1998:

After reviewing the March 3 decision, attorneys Peter Goldberger and Lior Feldman noted that Judge Foley articulated a definition of “compelling governmental interest” which has the effect of exempting the IRS entirely from RFRA. This violates the plain meaning of RFRA, which requires that all agencies of the government, including the IRS, prove that they have tried to accommodate individual conscience, but are unable to without defeating the compelling interest.

The appeal will also contend that the Tax Court erred in refusing to cancel penalties that the IRS had added to Priscilla’s unpaid taxes. The internal Revenue Code allows the IRS to waive penalties when an individual has “reasonable cause” for noncompliance. The IRS accepts excuses based on “ordinary business care and prudence,” as well as sudden emergencies, but refuses to recognize obedience to religious conscience as a “reasonable cause.” This policy violates well-established principles under the First Amendment, as well as under RFRA.

Read Priscilla Adams’ 1997 essay in More Than a Paycheck.

The IRS later sued her employer, Philadelphia Yearly Meeting, for failing to turn over taxes. Read more about this in the December 2004 More Than a Paycheck  (scroll down to “Mixed Ruling…) and on the New York Times.