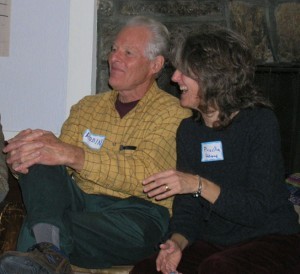 When I left college in 1974, I joined the Movement for a New Society and earned below a taxable level, filing W-4s as exempt. When I began to earn enough to owe money, I refused to pay 100% and continued to file W-4s as exempt. After a paycheck was garnished I stopped filing my 1040s because I did not want to help them in any way to collect money.

A number of years after I started working for Philadelphia Yearly Meeting (PYM) of the Society of Friends, IRS refused to accept my exempt W-4 and told PYM to start withholding taxes. I asked PYM to implement their policy to withhold and not forward the military percentage to the government (see article on page 1). As far as I know, I am the only person to use this policy since it was re-approved in the 1980s. IRS has taken the taxes, plus interest, many times from PYM’s bank accounts. I have reimbursed PYM all interest charges and bank fees so they will have no additional costs.

In response to an IRS levy for other resisted taxes, I asked PYM to implement the policy to refuse to honor it. The IRS has not yet taken PYM to court for this money.

I loan all my refused tax money at no interest to social justice organizations, in case the IRS is able to collect levies and I need to repay PYM. I donate to such groups an equivalent amount of money to that which PYM withholds from my pay and forwards to the IRS (the non-military percentage).

My primary objective has been to follow my conscience and to keep as much money as possible from being used to maim or kill people and the planet. The biggest compromise I have made to this objective is to stay with my job at PYM and to allow money to be sent in to the IRS instead of leaving my job. This compromise is due to family considerations, needing a job that allows me to raise my daughters as I feel I need to.

The compromise was not made without anguish. Now, I also see an important WTR benefit to this choice. By staying with PYM and using their policies, I keep the issue before the Yearly Meeting membership — a large group of people who would not have as much cause to consider war tax resistance without my presence.

For many years my focus has been to draw as little attention as possible from IRS. Now, I feel that I am reversing this; instead of being on the defensive and responding to their actions, they have taken a step that gives me a unique opportunity to be on the offensive. Part of this is to be as visible as possible.

This feels like the right path. I still have many fears, but I also have a renewed confidence. Although I cannot know how all this will turn out, I am clear that I will try very hard to make a crack in the system and call attention to the tragic destruction of people and the planet which our vast military industrial complex perpetuates.

This profile appeared in the March/April 1997 More Than a Paycheck.