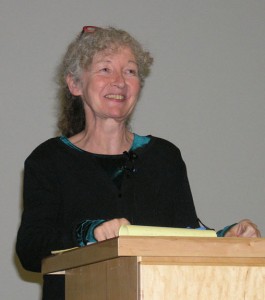 Kathy Kelly is a long-time peace activist and the co-founder of Voices for Creative Nonviolence, a NWTRCC affiliate. She has been a war tax resister since 1980, and while she hasn’t gone to jail for her war tax refusal, she has been arrested dozens of times for civil disobedience actions. Through her work, she has also spent significant time in war zones in Iraq and the West Bank, as a witness to violence and a friend to those thrust into war. Read her incredible bio here.

Kathy is currently serving three months in federal prison for trespassing at Whiteman Air Force Base in Missouri, where soldiers in front of computer screens pilot drones in the Middle East. You can read a last interview before she went to prison, as well as two public essays she’s sent since entering FMC Lexington.

In her book Other Lands Have Dreams: From Baghdad to Pekin Prison, which I am just now reading, she talks about becoming a war tax resister:

“I was hired to teach at St. Ignatius College Prep, a Jesuit institution and one of the top fifty schools in the country. Another faculty member, Al Schorsch, and I decided to become war tax refusers by lowering our salaries beneath the taxable income. I was earning $12,000 and officials at the school would distribute the $9,000 difference to other programs. I knew that I didn’t want to pay for weapons. And I wasn’t keen on the CIA, the FBI, the prison systems, US intervention in Central America, and the almost complete failure of any governmental system to serve needy neighbors, many of them desperate, in Uptown [Chicago].

“One of the most important spiritual directors in my life has been the Internal Revenue Service. Janis Joplin’s lyric, “Freedom’s just another word for nothing left to lose,” comes to mind. War tax refusers learn ways to become impervious to collection, and that generally means finding ways to live without owning property, relying on savings, or growing attached to a job that one couldn’t leave in the event of an IRS notice about wage garnishment.

As Ruth reported in the February/March 2015 newsletter, “For those moved to support Kathy, she suggests donating to the school project of the Afghan Peace Volunteers (send checks with “street kids” in the memo to VCNV, 1249 West Argyle St. #2, Chicago, IL 60640), or participating in the March 4-6 action to Shut Down the Drones at Creech Air Force Base in Indian Springs, Nevada, sponsored by CODEPINK, Nevada Desert Experience, Veterans For Peace, Voices for Creative Nonviolence and others. See shutdowncreech.blogspot.com. To write Kathy, address your envelope: Kathy Kelly, 04971- 045, FMC Lexington, Satellite Camp, PO Box 14525, Lexington, Kentucky 40512.”

Thanks for your inspirational work, Kathy!