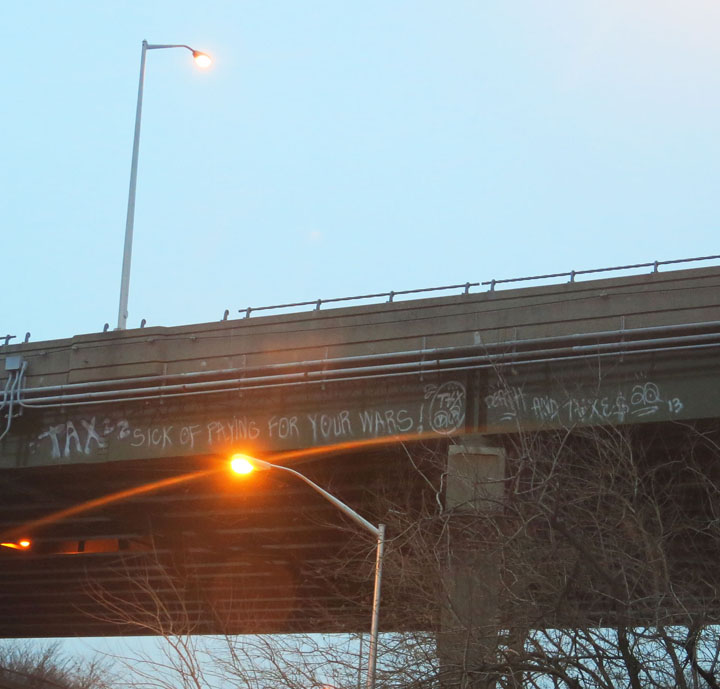 Seen where the Long Island Expressway meets the Brooklyn-Queens Expressway.

How very strange that we—myself, partner Ed, and friends and fellow resisters Liz and Kevin— first saw this graffiti as we were driving home from a memorial for Sallie Marx. It would have been an eerie coincidence, except that it was also great to happen onto this expression of frustration and defiance from someone unknown to us in the city.

Sallie was a fixture in New York City war tax resistance for more than four decades and a co-founder of the NYC People’s Life Fund (NYC PLF) in 1971. One person at the memorial said that when asked “what do you do?” Sallie’s standard response was “I’m a war tax resister!”

And Sallie would have been thrilled by this graffiti also. She was always excited when a new person came to a meeting, workshop, or demonstration, and she was always energized by whatever public actions were being taken to protest war and military spending. Her close friends used the Emma Goldman quote, “If I can’t dance, I don’t want to be part of your revolution,” for the memorial announcement, because Sallie loved to dance. But I also take “dance” loosely. Sallie got the same thrill handing out flyers on tax day and having conversations about war tax resistance with strangers on the street as she would being swept away by a good partner in her ballroom dancing sessions.

She was proud of keeping the Life Fund going. In 2007 Sallie and Bobby Hieger and Joanie Fritz organized an impressive celebration of the fund at The Living Theatre, which included representatives of many of the groups that benefited from the redirections over the years. Some of those include a drop-in center for homeless people, NY Committee for Occupational Safety and Health, Neighborhood Economic Development Advocacy Project, 4th Street Food Co-op, The Living Theatre, Picture the Homeless, CHIPS (see Sallie at this soup kitchen in NWTRCC’s film Death and Taxes– at 16:57 minutes), Theatre for a New City, NWTRCC (thanks!!), and many others.

Sallie was also especially proud of the booklet “Why Just Survive? Flourish! A New Yorker’s Guide to Jobs, Healthcare, Education, Alternative Living & Leisure Time Activities,” which was published in 2002 by NYC PLF. She and others wrote essays on low income living and health care, education, housing, employment, entertainment, and much more. The chapter on “The Alternative Consumer” covers everything from stain removal to saving on utilities and healthy eating. The booklet is out of print now, but Bobby Heiger of NYC PLF is working on an updated web version, so stay tuned….

That word “flourish” is just so Sallie. She was always optimistic and absolutely dedicated to this cause of ending war and sharing so that everyone in the world could live a good life without being a burden on resources and the earth. She could drive you crazy in meetings going off-agenda to an unrelated topic, but she had her own special flourish—you can see it in this photo.

Sallie died on November 11 at age 84. How we will miss her turning up at meetings and demonstrations in her bike helmet with her PLF brochures. The best remembrance is to make our alternative funds flourish!

Visit the NYC People’s Life Fund website to see more photos of Sallie and learn about the fund.

2 thoughts on ““Sick of Paying for Your Wars””