James Satterwhite, 1946 – 2016 “If we could read the secret histories of our enemies, we should find in each man’s life sorrow and suffering enough to disarm all hostility.” —Henry Wadsworth Longfellow In 1969, as I was graduating from college in Florida at the height of the war in Vietnam, I faced a dilemma. Should I go into the military to fight in Vietnam, or was there another option for someone who had come to the position that violence and war are wrong? At that time I was fortunate, as I was able to do “Civilian Alternative Service” as a Conscientious Objector under the Selective Service guidelines in effect at the time. After I completed my alternative service I […]

by Aaron Falbel In December of 1990, I became a war tax resister. Shortly before the Persian Gulf War (#1), I attended a peace rally on the Boston Common. Despite the impassioned speeches given by Howard Zinn, Daniel Ellsberg, and others that day, I had a sinking feeling that standing out in the cold for a few hours, chanting slogans, and marching through the streets of downtown Boston was not going to stop the war from happening. After all, why should President Bush care that my toes were frozen and my voice was growing hoarse. But sometime during that afternoon, a young woman handed me a half sheet of paper. On one side was a quote from Alexander Haig, Secretary […]

by Charlie Hurst and Maria Smith Charlie Hurst and Maria Smith, two Catholic Workers and war tax resisters living in Cleveland, Ohio, have had their wages garnished in the past. When they received a notice from the IRS this summer saying that they had a right to ask for a hearing, they decided to do so. They had an appointment with an IRS agent on September 13, and brought a lot of documentation with them, including a letter of support from Bishop Thomas Gumbleton. The IRS agent was supportive but said that ultimately they were still in violation of not paying their taxes. They are not appealing and are waiting to see what will happen next. Here is the statement that Charlie read in front of […] 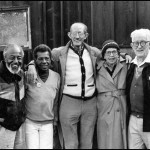 Written by Bob Bady Wally Nelson died on May 23, 2002. He died in much the same way he lived his life: without fear, and surrounded by people who loved him. Wally was born in 1909 near Little Rock Arkansas, son of Duncan and Lydia Nelson. He was the second youngest of sixteen children. His father was a Methodist minister, and the family spent a few years sharecropping. Wally grew up in segregated Jim Crow society, where the elders were former slaves. He learned firsthand the smell and taste of oppression, and the roles of master and slave. Through values he largely attributed to his father’s teachings, he grew to liberate himself from these roles. In the 1920s and 30s, […] 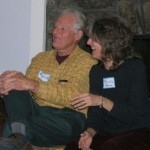 By Priscilla Adams When I left college in 1974, I joined the Movement for a New Society and earned below a taxable level, filing W-4s as exempt. When I began to earn enough to owe money, I refused to pay 100% and continued to file W-4s as exempt. After a paycheck was garnished I stopped filing my 1040s because I did not want to help them in any way to collect money. A number of years after I started working for Philadelphia Yearly Meeting (PYM) of the Society of Friends, IRS refused to accept my exempt W-4 and told PYM to start withholding taxes. I asked PYM to implement their policy to withhold and not forward the military percentage to the government (see article on […]