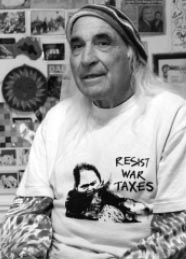 He’s been called one of the greatest criminal defense lawyers of the 20th century. He’s also only one of two war tax resisters since World War II to have been jailed for “willful failure to pay” federal income taxes. Last March, Tony Serra was released after spending nine months in Lompoc Federal Penitentiary in California. Twice before — in 1974 and 1986 — Serra had been convicted because of his war tax resistance.

There are hundreds of us who have been willfully refusing to pay our federal income taxes for war. Why him and not us? Or are we next? In June he agreed to meet with Susan Quinlan (Northern California WTR) and me so we could understand more about his resistance and the government’s response.

Forty-four years ago, not long after becoming a practicing attorney in California, Serra began refusing to pay taxes as a protest to the Vietnam War. He strongly identifies with the 1960s counterculture and continues to be a regular pot smoker (“better a pot-head than an alcoholic,” the fate, he says, of many top trial lawyers). He opposes capitalism, corporations, private property, bank accounts, insurance, voting, birth certificates, taxes, war, the institution of marriage, and other systems that seek to subjugate the poor. He and his former companion even gave their children “hippish” names — Chime, Shelter, Ivory, Lilac, and Wonder — as a creative rejection of more boring establishment names.

Taking an “informal vow of poverty,” Serra deliberately lives on minimal income, avoids buying anything new, whether that be clothes, car, etc., lives in small apartment, and has sometimes resorted to a sleeping bag on the floor. “I have no fucking interest in ‘things.’ ” Mostly he seeks to defend “outlaws” and indigent clients. “I take what I need and give the rest to my pro bono cases” (70 to 80 percent is his ideal). He did venture, briefly, into electoral politics with a 1971 run for mayor of San Francisco on the Platypus Party ticket. He came in sixth out of 11.

Serra, older brother of famed sculptor Richard Serra, gained notoriety in the 1970s and after for defending such people as Huey Newton of the Black Panther Party, members of the Symbionese Liberation Army, Judy Bari of Earth First!, and most famously Choi Soo Lee who was involved in a San Francisco Chinatown murder. That case became the basis of the 1989 movie True Believer in which the Serra character was played by James Woods. Serra’s flamboyant courtroom manner, manifested through cross examination and summation, got him a lot of attention as well as success in difficult cases.

But it wasn’t until 1974 that the government decided to prosecute Serra. After defending himself by putting the Vietnam War on trial and presenting numerous character witnesses, he was acquitted on two of the three charges, but convicted on a third, “failure to file,” serving four months in prison. In 1986 he was taken to court again and convicted of the strange charge “willfully filing late,” sentenced to a year (suspended) and five years probation.

As the years went on, “the ideology receded” and his resistance to taxes became more of a habit than a passion. His lawyer claims that Serra has a “dysfunctional relationship to money.” Because he identifies with the “outlaws” of society, he sees taxation as a means that oppressors use to control the oppressed. “I abhor the bourgeoisie.”

Then in 2005 he was convicted of the misdemeanor “failure to pay” $44,000 for tax years 1998 and 1999, sentenced to ten months and $100,000 (what the IRS estimated he owed over a five-year period). According to his attorney, the government threatened to charge him with a felony of “sequestering,” or hiding, his assets, so he recommended that Serra take the deal that would only involve the misdemeanor.

How did his case get to court, while most war tax resisters rarely see anything more than the odd lien or levy from the IRS? First, Serra has often not bothered to file, and those years when he does file, he doesn’t pay. Second, he doesn’t respond to notices he gets from the IRS. Just tosses them away. They tried serving levies on clients such as the Hells Angels. Not very productive. They even sent a couple of “keepers” to his office-men in black suits whose sole function was to sit around, intercept the mail, and open all the letters to see if they had checks in them. Serra was billed $50 a day for the honor. Fortunately, that lasted only a couple of days before they gave up. Serra usually just gets cash from his paying clients.

The Justice Department was so intent on getting Serra in 2004, they sent prosecutors from D.C. to conduct the case against him after the local District Attorney’s office declined to do so. Serra reckons that it had to do with Ashcroft’s office trying to make an example of a professional — any professional (“doctor, lawyer, or Indian chief”) — in order to get enough press to scare the average person. Other factors likely include his previous tax convictions; his notoriety; his continuing insistence on “blowing off” the IRS, its notices, and the tax laws; and that there has been nothing to seize — “it frustrates them.”

He served his time but has not decided whether to compromise his principles by making the required payments towards his $100,000 fine in the 2005 case. “Fuck them, I’m never paying, eat shit, I’ll go to jail where I belong” is what he’s inclined to tell them. Serra says he doesn’t mind prison because it’ll give him an opportunity to help other inmates with their legal problems. Also, he will have the time — something he doesn’t have now — to read and write. However, if he doesn’t pay, he risks returning to prison for contempt and he won’t be able to be a trial lawyer, something the 72-year-old Serra wants to do until he is 80, and he’ll miss being with his longtime companion Vicki Day.

All his life he has thrived on what he calls “win-loss imagery.” When he was young, Serra was an active participant in a variety of sports, including boxing. Then, as an attorney, he has enjoyed the fight of a trial — “I’m a decibel purveyor.” He would sorely miss that life.

This profile appeared in the July/August 2007 issue of More Than a Paycheck. Ed Hedemann is active with NYC War Resisters League and author of War Tax Resistance: A Guide to Withholding Your Support from the Military.