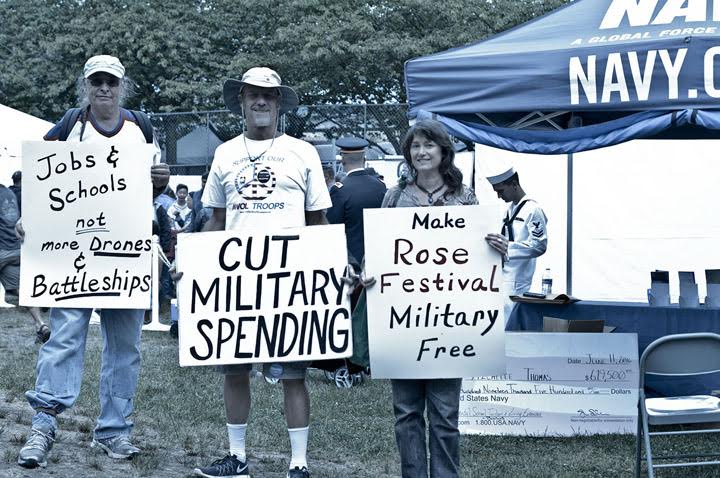 In June, about 18 of us with the Oregon Community for War Tax Resistance/War Resisters League gathered at the Rose Festival in downtown Portland to protest the presence of the military recruiters. The vultures (recruiters) set up shop near the Fun Center, where rides and games attract the younger crowds. Since the first Gulf War, I have slowly raised my awareness around issues of war tax resistance, starting with refusing to pay the 3% excise tax on my phone bill, to living below the poverty level without feeling deprived, and on to talking to high school students about options other than the military after graduating.

In the picture above you can see a large check in the background. It was made by the Navy, and in the memo part it says something like “for dental work, tuition, and health care,” as if they would give any one an amount like that in one lump sum! I protest at the Rose Festival in front of the military booths because I think another world, another way is possible, and hope that those considering joining the military will find peaceful paths to making the world a better place. The easiest way to prevent veterans is to encourage students to not join the military in the first place!
— Kima Garrison, Oregon Community for War Tax Resistance/WRL – Portland Chapter