While NWTRCC is celebrating its 40 years, I’m taking a second trip down memory lane with a volunteer project of sorting, filing and reorganizing the War Resisters League photo file. WRL produced many publications throughout its history (October 2022 is the 99th anniversary of WRL’s founding), so going through the five-drawer filing cabinet folder by folder includes a history lesson of antiwar and pacifist responses to the endless wars and injustices on this planet. 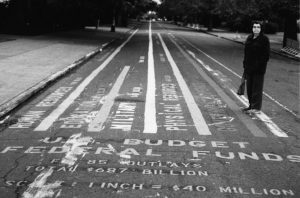 These days when I feel that we must be in the worst of times, items in the collections are reminding me that there were other dark times for peace activists. The 1930s had some heady years of pacifist sentiment but, as Hitler’s power grew, the pacifist position was marginalized and mocked. The atomic bombings of Hiroshima and Nagasaki introduced new horrors. The 1950s with anti-Communist fever and McCarthyism made it hard for organizations like WRL to grow their ranks. There’s a packed folder of political cartoons during the Reagan era that demonstrates the widespread anger at his administration’s “guns over butter” policies and the fears of a nuclear WWIII.

Reviewing all this history can enhance one’s feelings of failure to reach the kind of society and world we want, but the photos of antiwar actions and protests against injustices are also a testimony to carrying on against the odds. War tax resistance actions are scattered through the WRL files, so I pulled out a random few that can also give us ideas for things to do during the upcoming tax season — carrying on Chrissy’s theme from an earlier blog, “Making War Tax Resistance Visible and Accessible.”