It has been a busy spring for NWTRCC. Tax Day and our May conference are behind us and we are currently in the midst of our first fundraising raffle.

To make the May 2022 appeal a bit more fun and interesting, NWTRCC’s Fundraising Committee has organized a raffle. No donation is required to participate in the raffle, but we would appreciate your financial support. NWTRCC is only able to continue because of every donation it receives—both large and small.

To be entered in the raffle, simply fill out the raffle tickets and mail them back to NWTRCC… hopefully with a donation. If you normally donate online using PayPal or Resist, just email the office (at nwtrcc@nwtrcc.org) letting us know you would like to be entered into the auction, and we will fill out a sheet of tickets for you. A sheet of raffle tickets with a full list of prizes can be found at nwtrcc.org. Feel free to make copies of the tickets and hand them out to friends. Tickets need to be received by the time the drawing occurs on June 30.

Prizes include a 2-night stay in a cabin near the Nelson Homestead, a 2night stay at the Celo Inn in the Blue Ridge Mountains of North Carolina, NWTRCC swag, one-on-one skill shares, an integrative body work session, and more. (The full list of prizes can be found on the back of the raffle tickets!) 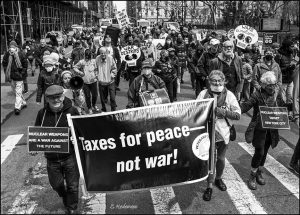 Chrissy and I have finished collecting Tax Day reports from our network. The full report can be found here. We were happy to receive reports of Tax Day actions in 18 cities. After a drop in Tax Day actions since the beginning of the pandemic, this brings us more in line with pre-pandemic numbers.

So please check out the report and see what happened all over the U.S. around Tax Day. There was a wide variety of actions—including street theater, a bake sale, marches, and penny polls! (A copy of this report will also be included in the June-July newsletter, which will be going out next week.)

NWTRCC held its fifth online conference April 29 to May 1, 2022. About 40 people attended the conference, which began on Friday evening with a social hour. 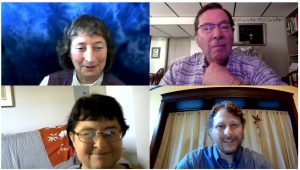 There were two panels on Saturday. The first was a “Panel on Vibrant Local WTR Groups,” featuring H. A. Penner of 1040 for Peace in Pennsylvania, Ginny Schneider who has been an active WTR organizer in Maine and New Mexico, and Kathy Labriola of Northern California War Tax Resistance / People’s Life Fund. A recording of this panel can be found here.

The second was a “Panel on WTR Outreach with Younger Activists,” which is featured in the next section. Saturday concluded with concurrent WTR 101 & 201 sessions.

The Sunday business meeting began with reports from both NWTRCC consultants (Coordinator & Outreach consultant) and a financial update (which included news about NWTRCC’s first fundraising raffle.

Next, we unanimously approved the nominations of Shirley Whiteside (Colorado) and Travis Christian (Oregon) to begin serving three-year terms on NWTRCC’s Administrative Committee. (A huge thank you to both Sue Barnhart and Jerry Maynard, who finished their three-year terms!)

The conference included attendees from Vancouver BC Canada and Geneva as well as folks from all over the United States. It was great to host such great panels with panelists from all over the country. It would be better meeting in person, but I am glad we were able to make the best of what technology has to offer.

One of the panels at our May conference featured two young activists who had participated in NWTRCC’s focus groups sessions a couple years ago. Their presentations sparked a lot of conversation. Here is some of the feedback the panelists provided about how NWTRCC currently performs outreach and areas for growth.

One theme that came forward was that war tax resistance should be promoted as a tactic rather than as an ethical or moral responsibility. The former can empower while the latter can bring shame. They also emphasized the importance of social media, especially Twitter, Instagram, and TikTok. NWTRCC uses Twitter and Instagram, but not TikTok, which they promoted as an avenue to reach younger activists by sharing short stories to allay fears and inspire resistance.