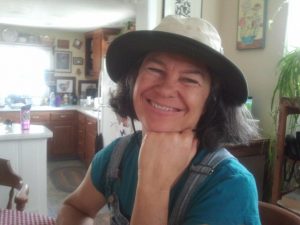 Back in December 2021, I wrote a letter to my 2 U.S. Senators—with no expectation—just a need to vent.  I had written to both about U.S. Rep. Ilhan Omar and Sen. Rand Paul’s joint resolution that would have stopped the arms sale to Saudi Arabia for use in its war on Yemen. I never expect much but I thought this particular issue might have penetrating potential due to the objections by Democrats when President Trump brokered the deal. Of course, my senators both voted to carry on with the arms sale (now brokered by President Biden) and sent replies to me with no reference to the issue at all.

I know that in politics we don’t always get what we want. Politics is a dance of compromise and I’m a pretty good sport. But as I wrote to my not-forward-thinking Senators,

From my perspective those we have elected to Congress are owned by the military industrial complex.  Otherwise why would “we the people” continue to promote wars and genocide in nations all over the world? So Raytheon (et al) gets what it wants… But our climate, and the refugee crisis, and the human crisis at home continue to deteriorate due to massive funding of the military industrial complex. It’s sick and I’m sorry you, undoubtedly a good person, have bought into this elephant in the room crisis. 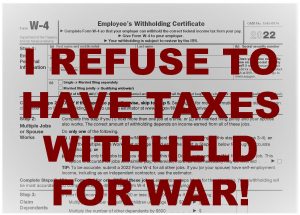 So what are we, ordinary peace-loving citizens of the Empire to do? We have to stop paying for it. In my formative years I was a non-filer for many years. Some of that time I earned money that was under the table. When I had jobs with W-4’s I claimed a lot of withholding allowances and continued not to file. I would religiously figure out what I “owed,” donate it to a few worthy causes, and send everyone I knew a letter explaining why I was doing this. At two work places I learned from former co-workers that the IRS had come to seize funds after I had already left those workplaces. I never wanted to fight with the IRS, I just didn’t want to pay for war.

But at some point my lifestyle was a little less “Catholic Worker” and a little more “middle class.” I married, we owned a home. I reconciled that I wasn’t a good enough person to be a full-resister. The Empire was giving me a lifestyle not afforded to anyone else in the world. My personal solution was to begin to file a joint return with my partner, do W-4 resistance so that less taxes were withheld from my paycheck, and “pay under protest” while withholding a “symbolic” amount. Withholding $100, for us, meant we were throwing a little gravel in the machine—maybe more than $100 was spent sending out the letters and collection processes to mean at least that much wasn’t going to fund war, until the money is seized from us. Eventually, the IRS got that money. Once they just took it out of the 2008 stimulus payment; once my partner began receiving Social Security they seized it from his payment, once they’d gone through the process of sending letters and liens and adding interest and penalties. On $100 that’s not a lot.

I have never wanted to spend energy fighting with the IRS. The energy I have is about the evil that I am complicit in when planes and bombs stamped “Made in the USA” fly over other lands. I remember a Catholic nun community that used to have a button that said “I have family in Iraq” during one of the wars waged on Iraq. I remember friends visiting in El Salvador during the “civil war” and witnessing pieces of exploded ordinance stamped “Made in USA.” U.S. made cluster bombs—banned by international convention—dropped on people in Yemen. Love letters from our country.

I’m grateful for the resistance of those who feel the only way to resist the war machine is to not pay. I feel very positive about the years I spent as a non-filer. I am inspired by war resisters in other countries who pay high penalties with their very lives. But I’m not sure the movement can afford the “all or nothing” approach to WTR. I always appreciated the “$10.40 resistance” idea that I don’t think ever took off, but if everyone who is against this mindless endless war philosophy held back $10.40 from their taxes owed couldn’t the ship slowly sink? It’s completely do-able, and empowering.

Does symbolic resistance matter? It does to me. When it’s time to send the tax day letter, just the act of saying we’re still here and we still believe there has to be a way to peace matters.

— Post by Shirley Whiteside. Shirley is also a committee member for the War Tax Resisters Penalty Fund, which offers to pay the interest and penalties of people who are collected on for war tax resistance. The fund does not pay the taxes, (the IRS just takes them) but it does provide for the interest and penalties seized from a war tax resister. A tax-filing citizen who’s able to ward off collection for more than 10 years has gotten what they want, they haven’t paid for war. A citizen who is collected on at least has this community of supporters to help make up the risk of their act of resistance. Together we are stronger. Go to nwtrcc.org/wtrpf/ for more information.

[Editor’s Note: NWTRCC has recently created a web resource on symbolic resistance as part of its Tax Season 2022 Refuse to Pay for War Campaign.]