[Editor’s Note: This work of creative non-fiction was previously published in Meat for Tea.] 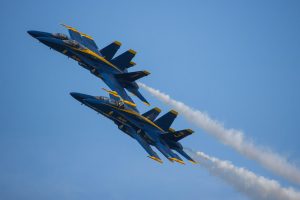 You were deafened. The sound was intolerable; it violated your sense of decency, your love of quiet, and your yearning for solitude. Why, on the top of this rather small green hill in southeast Vermont, was there this unholy din? It was drowning out the songs of scarlet tanagers and dark-eyed juncos, the scurrying of chipmunks, and the impressive (and gravity defying) hum of insect wings in flight. As the volume crescendoed it crushed your thoughts until all that was left was the urge to scream “Shut up!” You imagined this is what a tornado sounded like before it touched down and that the vortex of sound might suddenly pick you up. You’d be launched swirling up- wards, completely consumed by the sound.

Even though it felt and sounded like the two circling jets were right on top of you they were in fact probably thousands of feet above the granite boulder where you were sitting in the midst of green and copper colored shrubbery. Against a blue backdrop they were putting on a show— swooping, diving, chasing—you hadn’t paid to see. Except, well, you’d paid taxes for years, so this interruption to the day (and to peace and to the climate) was your fault in some small, but ongoing, way. You undeniably had a hand in this effrontery. 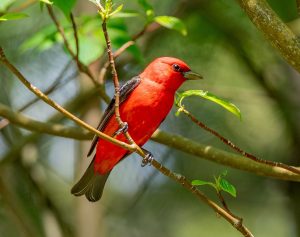 Scarlet Tanager in a Tree. Photo by Patrice Bouchard on Unsplash.

A hiker told you the jets were coming by every morning for weeks. It was better, he said, to come later in the day. You couldn’t focus on what he was saying, because all the space in your mind where listening could take place was filled with sound and consumed by outrage, frustration, and indignation at the illogic of the scene. You tried to catch glimpses of the jets, but, because they were so fast and small against the expanse of sky, it was almost impossible to do except for the briefest of moments; it left you with the disorienting feeling they were everywhere and nowhere all at once.

Eventually the planes sped off to the west to torment other unsuspecting hikers. As soon as they left you saw three birds of prey crest the hilltop. Swooping, diving, chasing. Though thousands of feet closer to you than their mechanical imitators had been, you couldn’t hear their show, but you could feel their celebration at the air being theirs again and the contrast was mesmerizing.

Lindsey Britt is the founder of Taxes for Peace New England and is currently serving a term on NWTRCC’s Administrative Committee, Lindsey is also a baker, an organizer of people and things, and an amateur ethicist. Her work has been published in Waging Nonviolence and The Commons. She lives in Vermont.

2 thoughts on “In Flight”