Congressman and peace, justice and civil rights activist John Lewis was a longtime sponsor in the House of the Religious Freedom Peace Tax Fund Bill. With his death on July 17 tributes abound and interviews with him can be found online (Democracy Now has a good one). Short of personal stories about Lewis (please add yours in comments!), I was glad to find this essay by longtime Peace Tax Fund director Marian Franz. It was originally written for the organization’s newsletter in 1998 and is included in A Persistent Voice: Marian Franz and Conscientious Objection to Military Taxation, edited by David R. Bassett, Steve Ratzlaff & Tim Godshall. Consider this post as offering two tips for summer reading also.

Loving the Hell out of People
By Marian Franz 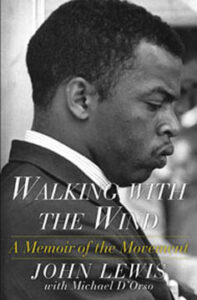 Walking with the Wind by U.S. Representative John Lewis (Simon and Schuster, 1998) is a riveting book, a must read. It recounts the author’s part in the nonviolent civil rights struggle that rocked this nation and forced it to face its conscience. The son of poor Alabama sharecroppers, who as a child preached to the chickens, Lewis now dines with the heads of state and is a member of the U.S. congress.

You will be awed and grateful that Lewis, the main sponsor of the Religious Freedom Peace Tax Fund Bill in the U.S. House of Representatives, is this manner of person. From the freedom rides of 1961, during which Lewis was repeatedly brutalized and imprisoned, to the civil rights march on “Bloody Sunday” in Selma, Alabama, where he suffered a fractured skull during an attack by state troopers, he maintained a quiet dignity with intellect, faith, courage and perseverance. I warn you, this story will force you to take a measure of yourself, and in my case at least, to realize there is still much growing up to do.

Here are some of the book’s lessons:

In training sessions, Lawson was tough. “When you can truly understand and feel, even as a person is cursing you to your face, even as he is spitting on you, or pushing a lit cigarette into your neck, or beating you with a truncheon—if you can understand and feel even in the midst of those critical and often physically painful moments that your attacker is as much a victim as you are, that he is a victim of the forces that have shaped and fed his anger and fury, then you are well on your way to the nonviolent life.” (p.77)

“It was not enough, [Lawson] would say, simply to endure a beating. It was not enough to resist the urge to strike back at an assailant. ‘That urge can’t be there,’ he would tell us…’You have to have no desire to hit back. You have to love that person who’s hitting you. You’re going to love him.’” (p.85)

Love is a way of life

This love is not simply a technique or strategy to be pulled out when needed. This is a way of life that permeates each moment from the monumental to the mundane. “This sense of love, this sense of peace, the capacity for compassion, is something you carry inside yourself every waking minute of the day. It shapes your response to a curt cashier or a driver cutting you off in traffic.” (p.77) Ouch.

This is a more all-encompassing love than loving something that’s lovely to you. Says Lewis, this is “a love that accepts and embraces the hateful and the hurtful. It is a love that recognizes the spark of the divine in each of us, even in those who would raise their hand against us, those we might call our enemy. This love realizes that emotions of the moment and constantly shifting circumstances can cloud that divine spark. Pain, ugliness and fear can cover it over, turning a person toward anger and hate. It is the ability to see through those layers of ugliness, to see further into a person than perhaps that person can see into himself, that is essential to the practice of nonviolence.” (p.77)

“Love the hell out of them,” Lewis remembers Martin Luther King, Jr., saying, “and he meant that literally. If there is hell in someone, if there is meanness and anger and hatred in him, we’ve got to love it out.” (p.78)

Marian Franz was Executive Director of the National Campaign
for a Peace Tax Fund from 1982 to 2005. She died of cancer in 2006.

4 thoughts on “Loving the Hell out of People”