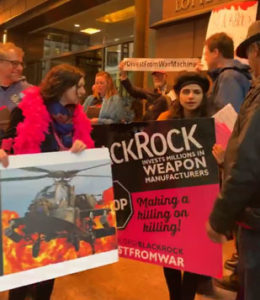 CodePink NYC organizers Sarah and Zena. Click for a video from the protest.

Outside a fancy hotel in Midtown Manhattan a crowd of us held “Divest from the War Machine” signs to greet shareholders of BlackRock, who were arriving for their annual meeting. The demonstration was organized by CodePink NYC in conjunction with CodePink’s national divest campaign; there were actions in other cities too.

BlackRock is some kind of big investment company that most of us probably don’t deal with directly, but they influence our lives. CodePink has targeted them as the top investor in weapons manufacturers such as Lockheed Martin, Boeing, Raytheon, Northrop Grumman, and General Dynamics. We were there to remind shareholders that their choices underpin the production of weapons used in military strikes around the world, resulting in the deaths of innocent civilians and the destruction of the environment.

Among the various groups represented at the protest, Extinction Rebellion NYC  had a strong contingent and invented some good chants (“New York City’s gonna sink, Divest Now Larry Fink” (the CEO of BlackRock). The investments of this one company link many issues, climate change and war being the most obvious, but there were also activists from Act-Up with signs protesting investment in Gilead, a pharmaceutical giant with a hold on anti-HIV medication.

At the same time, we were outside this $400+/night hotel with a constant stream of humongous SUVs picking people up and dropping them off. Getting BlackRock to divest from the war machine might be easier than getting the wealthy — and politicians — to at least order a more fuel efficient mode of transport.

Somehow being outside this luxury hotel….oh excuse me, they use “palace” in their name….and confronting a company with trillions of dollars in assets — much of it made on the graves of children — got me wanting to channel our dear departed models of simple living Wally and Juanita Nelson. Luckily I ran into a poem by Juanita based on an incident from Wally’s childhood that brings me back to earth and back to another interpretation of “divestment” — not just telling “them” to divest, but to look at our own complicity and set ourselves free.

Came the day for me to sign up to fight –
If I said no, I’d land smack in jail.
Still I stammered, “Sam, you got the wrong man,
You can’t drag me down that bloody trail,”
‘Cause I heard a voice sing out to me,
“Turn loose the line, and you’ll be free.”

Next the IRS held out its hand
Wantin’ me to pay someone else to kill
Have to quit my job to say NOT IN MY NAME.
How’d I have money to pay my bills?
Then I heard that voice whisper to me,
“Turn loose the line, and you’ll be free.”

Once I thought I would do just fine
In work that was good and still paid real well,
I was climbing the ladder, getting ahead,
But I just had to scale down, had to rebel,
When I heard that voice shout out to me,
“Turn loose the line, and you’ll be free.”

You can find this poem online along with lots of other interesting stuff in the NWTRCC Archives.

P.S. While looking up this hotel I ran into the interesting fact that the original section was built by a Henry Villard, who “became a pacifist as a result of his experiences covering the Civil War.” That was an unexpected find!