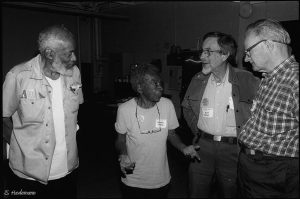 Joffre Stewart died in his hometown Chicago at age 93 on March 12. He became a dedicated nonviolent resister to war and injustice out of a short stint in the military during WWII when he went to prison for going AWOL. Early on he found his political home with the revolutionary pacifism and direct action of Peacemakers, a group founded in the late 1940s by Ernest and Marion Bromley and Juanita and Wally Nelson. He carried his anarchist-pacifist politics with him for the rest of his life, although Joffre was not someone who fit easily into a group. He was a poet and might have known every open mic poetry night in Chicago; he had a great voice for recitation, but it wasn’t always easy to comprehend or accept the content. 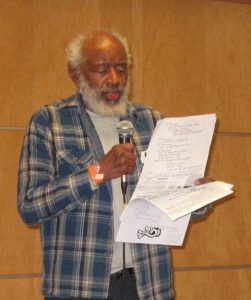 I first met him in person at the International Conference of War Tax Resisters and Peace Tax Campaigns in Washington, DC, in 2000, which was organized and hosted by the National Campaign for a Peace Tax Fund and NWTRCC. I knew of Joffre from the late 1980s because his mailings, with writing all over the outside of the envelope, frequently turned up in the mailbag at the War Resisters League where I worked.

At the 2000 conference, Joffre’s name was announced from the stage because he was being publicly censured for passing out leaflets that were felt as offensive and antisemitic by many attendees. Digging through movement records one finds interviews with Joffre at least back to the 1970s that discuss these charges with him. He couldn’t see it; he was anti-state and adamantly anti-Zionist but didn’t accept the charge of antisemitism. Despite his denials, his writings often incorporated the swastika among other symbols and continued to offend. Still, he did not change.

Nevertheless, I was intrigued to meet him in person and was shocked to find a soft-spoken engaging person with impressive stories from his history of activism (here’s sample from a Peacemakers’ write-up in 1950).

Through most of the 2000s and until Joffre became too frail to travel at about age 91, he came to most of the twice-yearly gatherings of NWTRCC. He’d often arrive early and be the first to greet people with his latest legal-size, 2-page flyer featuring one of his poems full of symbols plus some bits copied from our newsletter or other mailings. Many of our meetings had to include a disclaimer: “those handouts are by one person and do not reflect the beliefs of this organization.” He’d lay waste to a lot of good work by blocking proposals because of one word or phrase or any mention of legislation.

A correction to the NWTRCC newsletter from Joffre.

At times there were conversations about whether he should be banned, but those of us who were regulars at the meetings never came to such an agreement. Joffre did have something of a winning personality, and he was so damn dedicated to REVOLUTIONARY NONVIOLENT DISOBEDIENCE, as he might write. Joffre’s anarcho-pacifism continually challenged us to think before saying “my state,” “my government,” or “taxes for peace” (see graphic). When people would talk about nuclear disarmament, he would clarify that one nuclear weapon is too many. In response to an article explaining presentations of military budget percentages he wrote “1% of a ‘defense’ budget is more than enuf to destroy our world.”

Stories of his arrests for leafleting, or the time he took the bus to our meeting in Tucson and the border patrol hassled him at a checkpoint, reminded our predominantly white group that living while black is a whole other experience. He was resourceful and somehow found his way to our meeting location when his bus was way late or the person who was to pick him up couldn’t find him. All of us who knew him can share lots of stories  — funny ones too. (I mean, really, Joffre visiting the Las Vegas strip. It was incongruous.)

Thinking about Joffre gets me thinking about group process and all the dynamics involved in trying to keep a group together, welcome in new people, and get business done. Certainly our meetings became easier without this one-of-a-kind thinker. In many difficult group situations it might be necessary to resort to mediation or other measures to deal with a problem and avoid a total rupture. Joffre wasn’t really “mediatable”; he’d listen to criticism, maybe argue back, and carry on. It was just how he was.

Perhaps just out of softness of heart NWTRCC gave Joffre a political home, but it didn’t go unappreciated as illustrated in these stanzas from his poem about the suicide of Malachi Ritscher. Joffre was at a NWTRCC gathering at the time of his Chicago friend’s death.

So while I was in Vegas
plotting with tax-resisters
to move resistance into mass movement
Malachi committed the ultimate act
of tax resistance:
taking himself permanently
Out of the Infernal Revenue System

Had he known about us
he might be letting his little light shine
rather than having his
Millennium Flame
doused, smothered, hidden, suppressed
by the patriotically polluted overflow
of MainStream Media

If I believed in heaven I could imagine Joffre standing at the pearly gates with his bag of leaflets, definitely not going in, but handing his flyers to all the unwitting takers.

P.S. One more link from David Gross’s blog, which also takes you to the obit from a Chicago friend of Joffre’s.

5 thoughts on “RIP Joffre: A tireless resister — who could try patience”