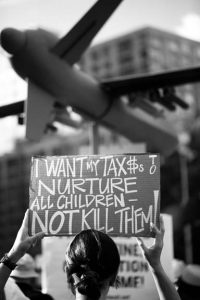 There have been a couple news stories in March about American military drones.

According the Bureau of Investigative Journalism, there were 1,878 drone strikes during Obama’s eight years in office, which was a dramatic increase compared to the drone use by George W. Bush. During Trump’s first two years in office, there have been 2,243 drone strikes. There have been 6,786 confirmed drone attacks since 2004, resulting in 8,000 to 12,000 deaths. Included in this number are about 800 to 1,700 civilians and about 250 to 400 children. Though, as Intercept journalist Jeremy Scahill notes in this latest podcast, we really have no idea how many people have been killed. The numbers provided by the Bureau of Investigative Journalism are based on what they have been able to discover.

This past month, there has also been great publicity about Amazon, which also owns Whole Foods, seeking a $10 billion Pentagon JEDI (Joint Enterprise Defense Infrastructure) contract to build a global surveillance and targeting system. According to the Pentagon, this system will greatly increase the “lethality” of the U.S. military. The purpose of this contract is the move the Pentagon’s information technology infrastructure to the cloud. This is not a new idea. Amazon already holds the $600 million cloud contract for the CIA.

According to Truthout, “JEDI is intended to not only improve information sharing, but to dramatically increase the US military’s ability to collect and sort through huge amounts of surveillance information from many, many sources on individuals and groups—governmental and non-governmental—around the world. This will be part of a process of using artificial intelligence and algorithms to identify probable targets for killing.”

Essentially, once JEDI is in place, the Pentagon will be able to collect and analyze information to be able to find and target potential drones targets at a much increased rate. The result will be a tremendous increase in killing. These targets could be determined simply by patterns of behavior without any legitimate proof that someone is a terrorist. This has already been documented with a journalist who was placed on the terrorist death list because of contacts made with known terrorists.

What is the proper response to all this? Should we boycott Amazon? I would not blame someone for doing so, especially when one considers how they treat their employees. But it should be remembered that Google and Microsoft also have government military contracts. Apple produces microchip processors that are used in missiles. Basically, anyone with a cell phone or computer is probably supporting companies with military contracts.

Although actions need to be taken to end the contracts that these companies have with the U.S. military, war tax resistance is one the clearest options. I cannot reconcile boycotting certain American companies that are benefiting from military contracts while voluntary paying taxes to the federal government that pays those contracts.

One thought on “Increasing “Lethality” of Drones”