I never had enough time in 2018 to write the post I wanted to write about escalating militarism on the U.S./Mexico border. Now I’m shifting out of my role as NWTRCC blog curator. While I don’t have much time to cover the issue, I want to at least bring it up again to our WTR and potential WTR audience!

Tear gas and military deployment on the border

The mobilization of the U.S. military to the border, of course, is itself quite striking. Militarization is not just a factor overseas, but right here within our own borders. We have soldiers patrolling against the perceived harm of migrants seeking personal safety and shelter, painted by the government as violent criminals.

When the Border Patrol throws tear gas into Mexico to attack migrants, it seems less like a domestic law enforcement issue and more like a war. And yet, did you know that the international Chemical Weapons Convention bans the use of tear gas in war, but permits it for domestic law enforcement use? That’s a contradiction I’ll never get over: as if chemical weapons are better to use on civilians within one’s own country. 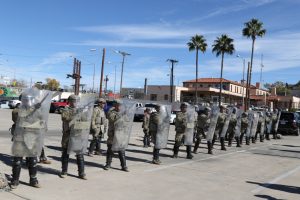 International law experts have also weighed in on the likely illegality of the U.S. firing tear gas into Mexico. But it seems likely that the U.S. government won’t face consequences for this behavior.

The cost of war

The deployment of active duty troops to the U.S. border through December 15 was estimated to cost $72 million. However, the deployment has been extended until January 31 now, so it hasn’t ended yet, and will cost even more. A National Guard deployment adds an estimated $138 million. That means over $210 million spent on border deployment in 2018.

Antagonism toward migrants makes a joke of the U.S. government’s already weak commitment to supporting asylum seekers and refugees. U.S. foreign policy has helped create unsafe environments in many countries, including in Honduras, where many of the recent migrants come from. It’s almost the least the government could do, to accept migrants and asylum seekers. Alas, the government vilifies those who are caught in the crossfire.

Reducing and ending U.S. militarism will prevent some of these crises from playing out again in the future. The U.S. ought to devote resources to keeping people safe, not demonizing, criminalizing, and caging them.

2 thoughts on “Military Operations on the U.S./Mexico Border”