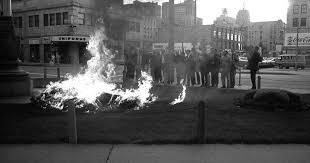 This year marks the 50th anniversary of the Milwaukee 14, in which fourteen men (during the planning stage there were also two women in the group, but that’s another story) raided a federal office in downtown Milwaukee, removed around 10,000 draft files, and burned them with home-made napalm. Though the fourteen faced decades in prison, each served about one year. Though largely forgotten today, the action made national headlines in 1968 & Howard Zinn served as an expert witness at the trial for the defense.

An event was held in Milwaukee this past September to commemorate the event. Joined by friends & family, most of the fourteen that are still living made the trip to Milwaukee. The event was a mix of celebration and reflection, with time dedicated to discussion with local leaders of current social justice movements. Though the event happened fifty years ago, the action was still a source of raw emotions for those involved. I would like to share some of what I heard, but I will omit names since the session is not online & I did not ask anyone’s permission to share their stories (though the event was open to the public).

None of the members stated that they regretted participating in the action, but it was clear that many wished that had been more intentional. The average age of the Milwaukee 14 participants was 25 years-old and the planning occurred a few weeks before the action. It also caused a great deal of stress in their relationships with spouses & significant others. Some missed the birth of children and others greatly missed their children. One member shared a crayon drawing that his six-year-old drew of him behind bars with a smile. This father wished that Fr. Daniel Berrigan had challenged him more about leaving his family behind for a year. He was not saying that he would have changed his mind, but he was cognizant of the fact that he had not sufficiently assessed the consequences.

Although the conference was not about war tax resistance, it gave me pause to reflect on my own WTR and the manner in which I counsel others in WTR. Though I still strongly believe that WTR is the right decision for me, I did start when I was 21 years old. I was a bit more arrogant at that point.

Though I feel comfortable with the decisions I have made with WTR and my few arrests for civil resistance, I try to be careful when I counsel others. At the same time, I rarely meet any prospective WTR who wants to jump right in. The fear of the IRS that seems to be ingrained into every American is so strong that most prospective WTRS are contacting me to find out if their fears are legitimate. Perhaps if someone came to me without any fear of WTR, I would find myself asking them, “Are you sure you’ve thought this through?”

The next NWTRCC conference is the weekend of November 2-4 in Cleveland. Sunday afternoon will include a Counselor Training, with a focus on what makes a good WTR counselor. The discernment process of the Milwaukee 14 will definitely be in the back of my mind during that session.