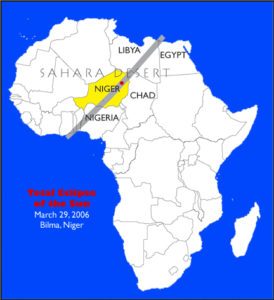 Ed and I had an amazing trip twelve years ago to the Sahara Desert in Niger, one of the poorest countries in the world. For those of you who know us, the reason we’ve traveled to some more unusual places is the chance to see a total eclipse of the sun — and it’s true, one is not enough! The August 2017 eclipse created new “eclipse chasers” since it crossed the U.S. and was visible to millions of people with tons of media coverage before, during, and after.

So, you may wonder what this has to do with war tax resistance…

The UN consistently ranks Niger near or at the bottom of human development based on life expectancy, education, and per capita income. Just spending money there is probably a great service to small merchants and the local travel industry. I’m not sure if that qualifies in our usual sense of redirecting taxes, and I don’t count that toward my redirection, but it’s a thought.

It happened that we went in 2006 when the country was fairly quiet as far as fighting goes. The Tuareg people had come to a peace settlement with the government a few years before and were wonderful hosts to us on the journey across the desert.

But ok, I’ve been reflecting on all this because Niger has been in the news off and on lately, most visibly when three U.S. Green Berets were killed there in a mission-gone-wrong last October. (Do people in this country question what the hell U.S. troops are doing in Niger in the first place, a place few of us can find on a map.) More recently there were some articles about how the U.S. is pulling troops out of Niger, but they are leaving behind enough to continue construction of a U.S. drone base, the horrifying details of which are described in this Intercept article. 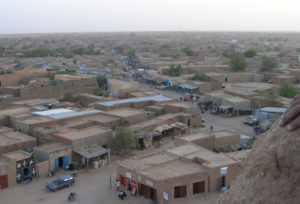 Agadez from the top of the Grand Mosque. Photo by Ed Hedemann.

When we went to Niger we flew into Agadez, the largest city in the eastern desert part of the country. There was one flight a day in and out. It was dusty and poor and charming and an education in how people scrape by – or don’t. (You can see what it looked like to us here.) Today that drone base is being built near Agadez, and I have been trying to imagine that desert town overwhelmed by U.S. airplanes, construction crews, and troops. The price tag for the base started at $100 million. The Intercept reports the operating costs will be $30 million a year.

This is what U.S. tax dollars are doing in one of the poorest countries in the world, one in which the desert is encroaching, hunger is constant, and the environmental consequences of military activity will only make things worse.

Why are those troops there? That goes back to the mess the U.S. (and allies) has made over 17 years of war-making in Afghanistan, Iraq, Syria, Yemen, and on into Libya and northern Africa. The wars and U.S. drone strikes have pushed the fighting from one country to another, and Niger’s borders are porous with an expansive desert in which to hide. And besides, do the American people pay any attention to what’s happening in Niger?

They should, because Niger figured prominently in the lies used by the U.S. and U.K. governments — and bought up by much of the major media — to promote the invasion of Iraq. Documents forged by some Italian military intelligence operatives indicated that Saddam Hussein tried to purchase yellowcake uranium powder from Niger. Despite evidence from the International Atomic Energy Agency that the documents were bogus, there was nothing stopping the Bush/Cheney/Blair crusade from which millions of people continue to suffer. 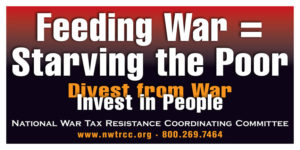 Grab your banners and get out there yet again on October 7 to demand an end to endless war.

October 7 marks the 17th anniversary of the U.S. invasion of Afghanistan — 17 years of spreading war, with death and destruction and anything but security to show for it. I live in New York City and I have not forgotten 911, but the last 17 years prove that we were right when we stood after that horrific day with our signs reading “war is not the answer.”