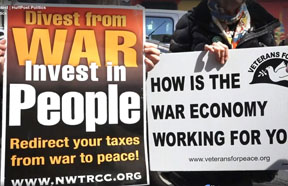 A new book by professor and former Air Force officer Sarah E. Kreps, Taxing Wars: The American Way of War Finance and the Decline of Democracy, argues that the decline of the war tax has a lot to do with why the U.S. modern wars in Afghanistan and Iraq are seemingly neverending. What do you think? From the summary:

“Sarah Kreps chronicles the entire history of how America has paid for its wars-and how its methods have changed. Early on, the United States imposed war taxes that both demanded sacrifices from all Americans and served as reminders of their participation. Indeed, thinkers from Immanuel Kant to Adam Smith argued that these reminders were exactly the reason why democracies tended to fight shorter and less costly wars. Bearing these burdens caused the populace to sue for peace when the costs mounted. Leaders in a democracy, responsive to their citizens, would have incentives to heed that opposition and bring wars to as expeditious an end as possible.

“Since the Korean War, the United States has increasingly moved away from war taxes. Instead, borrowing-and its comparatively less visible connection with the war-has become a permanent feature of contemporary wars. The move serves leaders well because reducing the apparent burden of war has helped mute public opposition and any decision-making constraints. But by masking accountability, however, the move away from war taxes undermines the basis for democratic restraint in wartime. Contemporary wars have become correspondingly longer and costlier as the public has become disconnected from those burdens. Given the trends identified in Taxing Wars, the recent past-epitomized by our lengthy wars in Afghanistan and Iraq-is likely to be prologue.”

Last month David Swanson wrote a call for folks to do BDS (Boycott, Divestment, and Sanctions) against the US with this pledge:

“I commit to supporting strategic targeted efforts to boycott, divest from, and sanction the U.S. government until it supports the rule of law, peace, and justice on earth. For people, organizations, and governments outside of the United States, this means such actions as seeking to hold the U.S. government and its officials to the rule of law, formally sanctioning the U.S. government and its officials, avoiding travel to the United States, assuring that online purchases made don’t originate in the United States, and any other means available to avoid supporting the U.S. government and military, including canceling all purchases of U.S.-made weapons (not to be replaced with any other weapons). For U.S. residents and organizations, this means such actions as purchasing goods from locally owned, small, community businesses, boycotting large corporations and military contractors, choosing goods and services provided by foreign nations that do not promote militarism, and refusing to pay war taxes, as well as seeking the unelection, impeachment, removal, and prosecution of U.S. officials guilty of lawless abuses of power.” [emphasis added]

Insofar as World Beyond War hasn’t given much time to war tax resistance as a tactic, I’m counting this as a minor win! And it’s a little more force behind our Divest from War, Invest in People campaign too.

2 thoughts on “Taxing Wars and BDS against the US”