I hate doing my taxes. For each of the last few weekends, “do your taxes” has been on the top of my to-do list. If I were to prioritize a list of things I procrastinate about, doing taxes might be on top. I’ve always done them myself since my situation is not particularly complicated, but I am usually rushing at the last minute to get it in the mail before or after our tax day demonstration. 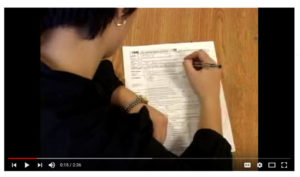 Writing this blog reminded me of a video by Megan Ramsey from our student video contest in 2007.

Probably the one thing that motivates me to finally get it done is so I can enclose the letter telling the government why I’m not paying (here’s one from 2003). If I wasn’t a war tax resister would I continue to file? My style is rather the opposite of others in our network who refuse to pay for war and feel that not filing is an essential part of their strategy.

I guess I’m inclined to the protest side of things — and I’m not arguing right or wrong here. It’s a matter of personal philosophy and motivation.

Other people also have less inclination for street protest, so I was thinking about that the other day when our local War Resisters League group held a vigil and march for the 15th time since the U.S. invasion of Iraq on March 19, 2003. Our group has somewhat dwindled and we almost didn’t do it this year, but we rallied at the last minute and I was glad we did. We were in midtown Manhattan, so there were lots of people who saw us and plenty who took pictures and video, nodded their agreement, took our leaflet, or thanked us for being out there (not to mention the online circulation of photos and videos).

Just before the demonstration I was writing my 16-year-old nephew, so it struck me that he was born the year the U.S. bombed and invaded Afghanistan, launching us into endless war.

Then how can one not think about the teenagers in Iraq and Afghanistan who have lived and breathed war every day of their lives.

This weekend teenagers will be leading the March for our Lives in Washington, DC, and cities around the country* calling for strong legislation to stop gun violence including the massive violence inflicted by the AR-15 military style rifle.

Let us hope their demonstration will be successful — and will inspire them and others to connect more dots and take action against the violence of their own government. After all, these teenagers will be paying for the costs of the current wars for the rest of their lives.

The price paid by the teenagers in Iraq, Afghanistan, and Pakistan is unfathomable.

Up against that thought my protests do feel insignificant, but I guess I think we have to keep ourselves out there in the mix, calling for peace and being ready for what Living Theatre founder Judith Malina called “the beautiful nonviolent anarchist revolution.”

I’m so glad to have thought of Judith at this moment. She died at 88 three years ago, but she never quit demanding a better world through her acting, her marching, her tax resistance, her arrests. The tributes to her online (The Nation’s is one) should inspire us to keep at it no matter the odds. (She probably would not have wanted me to rush to get my taxes done, but at least she would have supported the resistance part of it.)

*If you are joining the march, here are some posters you can print out

2 thoughts on “Taxes, Teens, and the Costs of War”