People who join NWTRCC’s e-list (subscribe here) receive a welcome email that asks how they found NWTRCC. Here are some responses stored up over the past year or so, which point out the importance of the internet — but don’t discount leafleting and talking to friends either! New people often say they have known about war tax resistance, or tax resistance, for a while but deciding to actually do it takes longer, or takes some confluence of factors. It is a reminder that much of what we do as organizers is plant seeds; there may not be instant gratification, but maybe readers who are organizers can take heart from some of these comments. I’ll post these without names, but thank you to everyone who responds to our question! 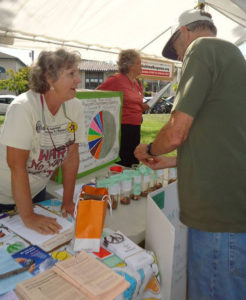 Outreach at the Petaluma Progressive Festival in California.

“I finally am becoming a war tax resister this year, so I found your website and have very much appreciated the materials you give to support this important action. With gratitude and best wishes.”

“I found your organization by doing a google search regarding withholding taxes for moral reasons. The thing that spurred me to search (there are so many things these days) is the apparent go-ahead on the military parade that’s being planned for November. I am happy to have found you and will look forward to the emails and other information.”

“As April 15 approaches, I found myself wondering yesterday if there was a way I could opt out of supporting this administration’s policies other than reposting my disdain to like-minded friends on a FaceBook page. And I decided, in my kitchen with peanut butter and spoon in hand, that I would not pay my federal taxes.
I then hoped there was a place in New York City where like minded individuals advocated, educated and got educated, met, discussed, planned, acted – a tax resister’s salon, if you will – and I found an article from February of last year in The Guardian about what appears to be a scattered movement to resist this administration’s policies by withholding their federal tax dollars. And there you were.
In short, I am blindly in. I am also looking for guidance and wanting to be a part of a concerted effort so that my voice is not lost. I am not sure if you are in the market to educate those of us who, aside from being opposed to funding military wars, are also opposed to funding policy wars waged against our people, our country, our environment, our world. I need to take action that is personal and emotionally satisfying. And so I turn to you.”

“I am in Canada and have placed the military part of my taxes in the Peace Tax Fund of Conscience Canada in years past.

“As the military budget increases yearly I think it is time that the citizens of both countries realize that paying for illegal wars is surely illegal: https://www.newyorker.com/magazine/2017/09/18/what-happens-when-war-is-outlawed.” 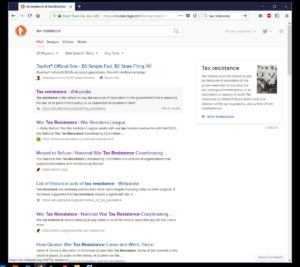 “I found you by googling ‘tax resistance’”

“I found one of your brochures at a church in Berkeley, CA.”

“many thanks for your email. I learned about you and the concept of tax resistance through this article: http://www.truth-out.org/news/item/40248-where-your-dollars-are-going-why-some-anti-war-activists-are-withholding-taxes.”

“I was fascinated by the idea of refusing to pay for war by withholding taxes and since have done a little research: as I live in Germany, I tried to find out how many percent of our taxes go to military spending. It’s tricky because officially Germany does not spend a lot on “defense” but of course some of the biggest weapon producers are German and weapon exports are “important” to the German economy and I daren’t think how many Euros are being spent unofficially on facilitating this kind of business. As all of this is morally highly questionable, they tend not to advertise it too much and so people don’t think about it.
Anyway, that’s why I signed up to stay informed what you do in America and to learn from it. I am engaged in peace and nonviolence activism here in Germany and if you have any international cooperation with other tax resistance movements I would be interested to know and spread also among the German peace movement.
I hope that all peace-loving people in the world can unite one day and sweep away this system of violence!”

“Thanks so much for the information. I look forward to learning more about your activities. I found the link to your list in the Guardian article that ran yesterday on people who are or want to be tax resisters to the Trump administration.”

“I found your group when doing research into how I could legally hold my taxes in escrow until tRump releases his.  I expect that could be for the next four years, during which I do not want to support the unraveling of American democracy, which I see getting worse by the day. Listening to Bannon, Flynn, and Sessions, makes it strikingly clear to me that we will soon be engaging in an all-out holy war against Islam, most likely launched on false pretenses – perhaps as a result of the US government engineering a terror attack on US soil.  I am sad to say that I have lost all faith in our leaders and have no doubts that the current administration is evil enough to slaughter American citizens as a way to justify an attack on Iran in alignment with Russia – against its foremost oil competitor in the region.  I would be horrified to contribute even a penny of my money to such an immoral war and want to be ready for that tax protest.
I am hoping to learn how to legally withhold my taxes as a means to do just that.  Any information you can suggest or supply would be of great interest to me.”

“Searched the web for “tax resistance,” came upon the Wikipedia article on tax resistance, clicked through some links I don’t recall and landed at your site!” “A friend of mine shared a link on facebook in an argument about taxes.”

“Hi! I found the list when listening to a permaculture podcast featuring Ethan Hughes (here: http://www.thepermaculturepodcast.com/2015/episode-1523-ethan-hughes/), and he mentioned being a war tax resister. Cheers!”

“I have known about war tax resistance for some time but decided I needed to know more. I googled the subject and up came your website.”

One thought on “The Path to War Tax Resistance”