Tax season is here! Calls and emails come to the NWTRCC office from people who don’t want their taxes going to war, border walls and deportations, a white supremacist system, tax laws made for the rich, a government set on speeding up climate change, etc. etc. etc.

Despite the desire to resist, many of these people express a fear of doing it alone. Lots of people like the idea of a pledge: “I’ll resist when 10,000 others sign on to a tax resistance campaign over a particular issue.” There’s one about stopping war with North Korea now.

On the one hand, most of us longtime resisters want to say yes, let’s go for it. On the other hand, there have been many pledge campaigns over the years and somehow that critical number is never reached. So we encourage people who feel strongly about protesting with their money to act on their feelings right away. But you don’t have to do it alone.

At a recent war tax resistance meeting and in response to some of the bigger ideas for national campaigns, longtime resister Randy Kehler suggested, “Keep it local. Find 6 people who will do it with you; a group that really supports each other. 1,000 small groups around the country would be great development. Create WTR affinity groups.”

While war tax resistance groups have existed for decades, the age of the network is showing, and a new style of organizing is needed. Creating an affinity group for direct action is not a new idea, but it is not a model that has been promoted much among war tax resisters. Such a network of WTR affinity groups would begin to form a strong foundation for a bigger campaign in the coming years.

There are lots of resources about forming affinity groups on the internet. Try any of these to get started: 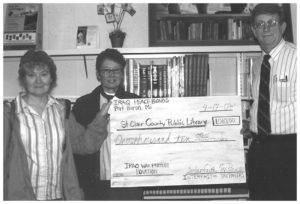 “Interfaith Group for Good Local Community Education Instead of a Bad War in Iraq” present a check of resisted and redirected war tax to their public library in northern Michigan. Individuals redirected $100 from their federal income tax due to a peace escrow account, and said, “When all our soldiers are brought home, we will settle our outstanding debts with the IRS.” Photo by Michael McCarthy (2007).

Seeds of Change UK – a really solid write up

Some other steps and action ideas:

Add your ideas, tell us your experiences, or point to other resources in the comments below or to the NWTRCC office.