Given all the crises we are seeing (or living) today, the crime of sustaining a massive military and endless wars is obvious. Emergency relief has a tiny budget compared to the Pentagon, and recently some members of Congress began to demand that new money for crises must be offset by spending cuts. You can bet they are not looking at the Pentagon for those cuts. 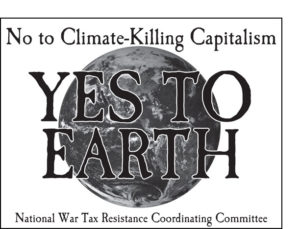 As I’ve watched the news about devastating hurricanes and fires in recent months, I was thinking that sending the military to help with relief is a far better use of the troops than sending them to war. It would, of course, be better if they were actually trained in relief rather than killing, something that a lot of young people would probably rather do than join the military if they had a choice.

But then the overwhelming bad things about “military aid” woke me out of my reverie. Democracy Now! has done a good job of reporting on the crisis in Puerto Rico. During the October 2 show journalist Juan Gonzalez pointed out one rather ironic thing:

…the general that President Trump sent to take charge of the situation in Puerto Rico just a few days ago, right away said he did not have enough equipment and supplies to deal the situation. Now, if there is one institution in the United States government that knows how to deal with Puerto Rico well, it is the military. For decades, up to 13 percent of the land of Puerto Rico was military bases, including the largest naval base in the world, Roosevelt Roads. The Ramey Air Force Base, strategic Air Force command base, was there. And so the military knows how to get around Puerto Rico, how to deal with the terrain of Puerto Rico. And the fact that the military was not sent in earlier by the president to be able to help the people of Puerto Rico, even as the storm was heading toward Puerto Rico, I think that was a strategic mistake.

However, among the reasons for the slow U.S. response to the crisis in Puerto Rico may be the fact that the U.S. does not have strategic bases there; most of them have closed. Other  stories brought out more of the darker side of the military’s impact in Puerto Rico. The September 21 guest on DN! was Emily Atkin, who had written an article for the New Republic on the environmental crisis in Puerto Rico and talked about Vieques: 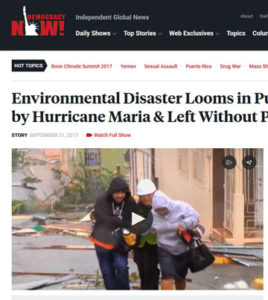 “Vieques is now sort of a tourist destination, but for 60 years it was used by the U.S. military as a bomb testing site. …Now it’s a federal Superfund site, because 75 percent of the island is contaminated with waste from the munitions. There are also unexploded munitions—meaning bombs, ammunition, other types of explosives that are unexploded—all over the island. That’s not really a concern for them detonating, but it is a concern for them leaking whatever is in them, especially when very high winds and lots of flooding hit an area.”

The October 6 show interviewed people on the island, including Robert Rabin, who said:

…the hurricane moved in with a gigantic tidal wave sweeping directly over the bombing range. You know, many of us who are cancer patients—right?—and I include myself—we’re certainly concerned that this is going to bring more toxics into our immediate environment, and as well as creating serious danger for people who are in the water, particularly fishermen, other people hired on boats, or just people who go into the water.

But even as people need fresh water and food and other supplies and are grateful to see a U.S. military transport come in loaded with goods, there’s the propaganda value both there and at home that helps to fuel militarism. An article in Stars and Stripes written in 2013 after a typhoon in the Philippines discussed this issue:

U.S. aircraft carriers loaded with equipment, supplies and thousands of troops have shown up early to some of the world’s worst disasters over the past decade, including tsunamis in Japan and Indonesia and a deadly earthquake in Haiti.

The massive ships are a potent symbol of U.S. power — and charity. Disaster relief has become a key mission for the United States and a way to exercise the softer side of its military influence overseas.

Such relief work is especially valuable now in the typhoon- and earthquake-prone Pacific, where the Obama administration is proposing that the U.S. refocus its military and diplomatic efforts…

On the one hand, it is probably true that members of the national guard and other forces have done more to bring relief to victims of natural disasters around the world than I have with my meager redirection of tax dollars to regions in crisis — mainly when I hear from others about an indigenous organization doing good work.

On the other hand military “charity” comes with a huge price, some quid pro quo between the country and the U.S. military — not to mention the further glorification of the military here at home that helps to keeps feeding the monster. 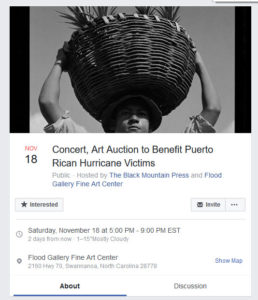 As war tax resisters we try to lessen the disparity with our own money, so I’ll make a plug for a redirection possibility now: Carlos Steward, who has been a resister and active in the NWTRCC network for some years, directs an art gallery in Asheville, North Carolina. He has family in Puerto Rico, and his gallery is co-sponsoring with The Black Mountain Press a Concert, Art Auction to Benefit Puerto Rican Hurricane Victims on Saturday, November 18, 2017. You can follow the links (you don’t need a Facebook account) to an online auction and bid on a piece of art that you can treasure while giving aid to Puerto Rico. Painless!