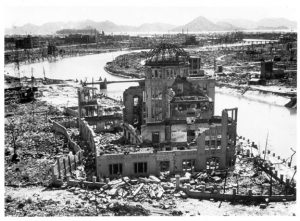 Hiroshima destroyed by US atomic bombing, 1945.

August 6 and 9, 2017, mark the 72nd anniversaries of the atomic bombings of Hiroshima and Nagasaki. War tax resistance spans the nuclear age, and many war tax resisters have been motivated by the horror of those bombings, by the frightening possibility that nuclear weapons will be used again, and by the human and financial costs of the whole process of producing those weapons.

In the dangerous moment that we find ourselves today, one of the bravest pioneers of the modern war tax resistance movement, James Otsuka (1921-1984), comes to mind. As with other war tax resisters from the 1940s, he was a conscientious objector during World War II and refused to serve the military in any capacity. For that he was jailed for three years in violation of draft laws. As an American of Japanese descent, he had already been confined to a Japanese prison camp in California and continued to confront racism from courts and authorities in response to his acts of conscience.

After prison, Otsuka attended Earlham College in Richmond, Indiana, where the Quaker philosophy led him to begin refusing to pay 29% of his tax ($4.50). This debt led to an appearance in Indianapolis District Court on August 19, 1949. At one point the judge looked at Otsuka and asked, “How would you like to go back where you came from?” He ordered Otsuka to pay the tax by September 1 “or face serious consequences.”

Otsuka was back in court on September 1 facing the same judge, who sent him to prison for refusing to pay the tax. The 90-day sentence included an additional fine of $100, which Otsuka made clear he would not pay. (You can read the text of their back and forth in court in War Tax Resistance: A Guide to Withholding Your Support from the Military.) Due to be released from the federal prison in Ashland, Kentucky, on December 28, the U.S. Commissioner ordered that Otsuka be kept in prison indefinitely until he paid the fine. This led to protests by pacifists and others around the country.

Otsuka was released on January 15, 1950, after serving 136 days though he paid no fine and no tax. Two months later on tax day (then March 15), James Otsuka rode a bus into the restricted area of the atomic bomb plant at Oak Ridge, Tennessee. He was arrested when passing out leaflets to workers, which read in part: 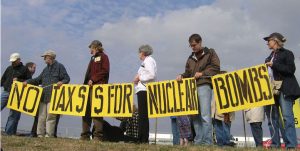 I have come to Oak Ridge… to dramatize to my fellow citizens that our tax money is being used in large part for the destruction of the world. At 10:45 on an August morning in 1945 the first atomic bomb was used for human destruction. I came today to burn, at that hour, 70% of a dollar bill, symbolizing the percentage of taxes that, according to our President, Harry Truman, is being used for military preparation and for fighting the “Cold War.” (Radical Pacifism by Scott H. Bennett, p. 190)

Flash forward to today with a U.S. President who is quoted as saying to advisors during the campaign months something to the effect of “What’s the point of having nukes if you don’t use them?” We’d be drawn to the obvious conclusion: get rid of them, starting with the U.S. However, this President, in response to North Korea’s missile tests and Kim Jong-un’s equally dangerous taunts, may well decide to use them. Recently on NBC’s Today Show, Senator Lindsay Graham quoted Trump as saying that Trump would risk war to stop North Korea from having missiles and nukes that can reach America, and “If thousands are going to die, they’ll die over there.”

We need to channel the persistence and bravery of James Otsuka into our actions and our organizing. 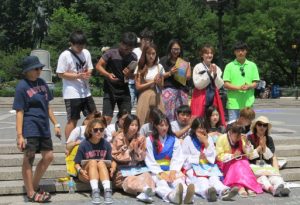 Activists with Hope Butterfly, a South Korean group who tell the story of Japanese sexual slavery and campaign for an official apology from the Japanese government.

I recently had the chance to meet with and speak to a group of young people from South Korea. I think of their faces and the dangerous moment we are in. What more can we do to stop this insanity and protect the lives of the thousands that Trump does not care about?

One thought on “Resisting Nukes – Then and Now”